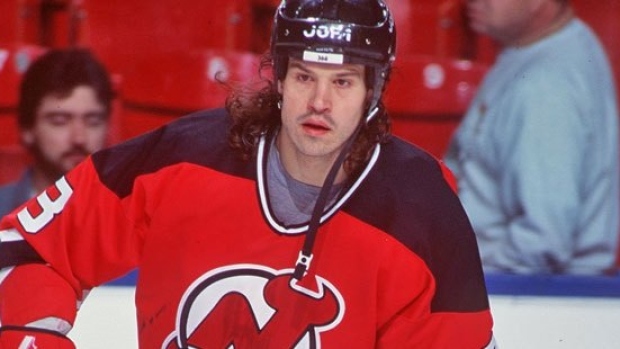 Former NHL player Mike Peluso says he’s permanently disabled and has had nine grand mal seizures because of brain injuries he suffered during his playing career.

The insurance company of the New Jersey Devils – one of five NHL teams Peluso played for – has a different theory.

Chubb Group of Insurance Co., citing subpoenaed records from Peluso’s doctor, says in a newly filed court document that “most of [Peluso’s] documented seizures have been brought on by a lack of sleep, partying, dehydration, binge drinking, and failure to take medication…”

The document is related to a workers’ compensation claim Peluso filed in San Francisco in 2012 alleging he is now permanently disabled. He named four of the five NHL teams he played for – New Jersey, Ottawa, St. Louis and Calgary – and their insurance companies as defendants in the claim.

In a Jan. 12, 2017 filing with the California Workers’ Compensation Appeals Board, Chubb’s lawyer Samantha Deutschel wrote that the insurer hasn’t received proof of Peluso’s recent seizures, one of which is alleged to have occurred in August of 2016.

“Contrary to [Peluso’s] assertions, most of [Peluso’s] documented seizures have been brought on by lack of sleep, partying, dehydration, binge drinking, and failure to take medication…” Deutschel wrote. “In fact, defendants have not been provided with any medicals showing recent grand mal seizures as presently alleged.”

Deutschel also alleges that Peluso has not offered any “medical evidence supporting the contention there is brain damage and diagnosis of dementia as presently contended.”

“[Peluso’s] own evaluations show he can conduct his everyday life,” Deutschel wrote. “…the applicant pays his own bills, cooks, monitors medications, goes to the gym 4-5 times a week, long term memory is excellent and enjoys golf and rollerblading.”

“Chubb’s statements remind me of the NFL’s mindset towards concussions and brain injuries before it admitted the link between the two: delay, deny, and hope they die,” Stuckey said.

The Devils were reprimanded by the appeals board in November, 2016, after it concluded the NHL team “wrongfully withheld” key medical documents from Peluso and his legal team. Devils vice-president, senior counsel, Christine Steinberg has since responded, writing in a Jan. 12 affidavit that she properly provided the documents in question to Chubb in both 2013 and 2015.

Stuckey and the defendants have been at odds over several documents that Stuckey calls crucial to Peluso’s compensation claim.

One document is a Dec. 18, 1993, medical report confirming Peluso suffered a concussion after hitting his head on the ice during a fight. The second is a Feb. 21, 1994, report from a neurologist warning the Devils that Peluso could have further seizures if he suffered more head trauma.

Those reports surfaced in May 2016 and have been referenced by medical experts who testified Peluso is permanently disabled. The Devils had argued those reports should not be allowed into evidence as part of Peluso’s claim because they weren’t filed within the appropriate period.

“These documents were responsive to valid discovery requests… but were inexplicably not produced by defendant New Jersey Devils,” California Workers’ Compensation Appeals Board commissioner Marguerite Sweeney wrote in a Nov. 15, 2016, decision. “Due to defendant New Jersey Devils’ dereliction of its discovery obligations, these documents clearly ‘were not available’ to applicant prior to the close of discovery.”

The Devils’ Steinberg wrote in her affidavit that she sent Peluso’s medical records, including the neurologist’s warning, to Chubb on March 7, 2013.

The Devils’ insurance broker confirmed those documents were forwarded to Chubb the following day, according to Steinberg.

On Dec. 15, the workers compensation panel agreed to a request from the defendants to decide Peluso’s case in two possible trials. A first trial may be held to determine whether Peluso’s case should be held in California, and, if so, a second trial would then be held to hear the merits of his case.

Stuckey is appealing that development, arguing it would delay Peluso’s case by at least a year.