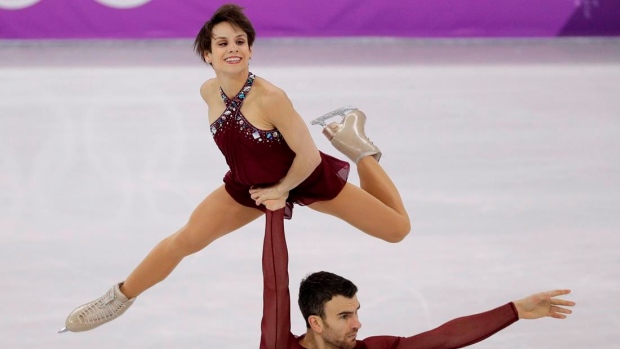 The International Skating Union has apologized and replaced its world championship commentators for vulgar comments aimed at Canadian Meagan Duhamel.

British commentator Simon Reed called Duhamel, a two-time world pairs champion, "that (expletive) from Canada" at the end of Wednesday's pairs broadcasts, seemingly believing his mic was turned off.

Reed and fellow Brit Nicky Slater laughed after the comment.

"There is no place for harassing and abusive language or remarks and behavior in sport and our society," the ISU said in a tweeted statement on Thursday. "The ISU took instant action with its service provider to suspend both commentators with immediate effect and neither will cover any future Figure Skating events for the ISU."

Duhamel -- who won two world titles and an Olympic team title with Eric Radford -- and other international skaters had been critical of numerous comments made by the Reed and Slater, who usually work for British Eurosport.

Both said the Russian skaters, who were banned from the event after Russia's invasion of Ukraine, were missed at the world championships. They said they couldn't tell how many rotations were in a jump since they don't follow skating. One called a 16-year-old skater "a sight for sore eyes."

"Hello @ISU_Figure The commentators on your feed noting that a female partner is ‘taller and heavier’ is just not at all necessary and super inappropriate. That was just one of many ridiculous statements made today," pairs skater Kirsten Moore-Towers tweeted.

Reed's vulgar comment about Duhamel went viral, prompting international skaters such as Kaitlyn Weaver and Adam Rippon tweeting in support of the Canadian and stating they would buy merchandise emblazoned with the insulting phrase.

The world championships run through Sunday in Montpellier, France.

This report by The Canadian Press was first published March 24, 2022.