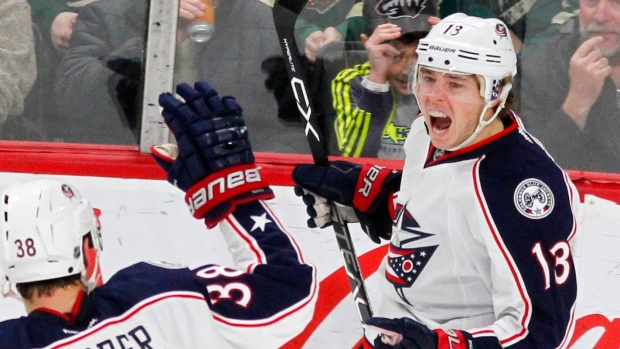 This victory was one of the most impressive yet.

Cam Atkinson scored twice to help the Blue Jackets move their streak within two wins of the NHL record and stop Minnesota's 12-game run with a 4-2 victory over the Wild on Saturday night.

"We've got the right group of guys to do it with," right wing Josh Anderson said. "Everybody's positive in the room. We're all having a bunch of fun."

Never in league history had two teams taken winning streaks that long into a game.

"I'm happy for the guys," Columbus coach John Tortorella said. "I'm proud of our team and the way they've handled themselves through all this."

Sergei Bobrovsky made 29 saves, yielding two or fewer goals for the 10th time during the run, and defencemen Jack Johnson and Seth Jones each had goals assisted by Brandon Saad in a frenetic second period sparked by consecutive fights. That cost Minnesota one of its top defencemen in Matt Dumba, and the Wild dropped into a rare three-goal hole. The Blue Jackets didn't slow their pace, either.

"They were still coming, and that's why their record is five losses in 35 games," Wild coach Bruce Boudreau said. "John has got them playing real well."

Jason Zucker reignited the arena with his breakaway flip past Bobrovsky just 24 seconds into the third period for the Wild, but that was as close as they came. Devan Dubnyk stopped 21 shots, surrendering four goals for the second straight game after allowing three or fewer in his first 27 turns.

Mikael Granlund had the first goal for the Wild, who also had a franchise record-tying eight-game home winning streak end. This was their first loss since Dec. 2 in overtime at Calgary and their first defeat in regulation since Nov. 29 at Vancouver.

"This one stings," said Dubnyk, not fully ready to reflect on the run.

The Blue Jackets matched the second-longest winning streak in NHL history, trailing Pittsburgh's 17-game run in 1993. Their last loss was in overtime at Florida on Nov. 26, and their last defeat in regulation was Nov. 23 against Calgary. Twelve of the 15 straight wins have been in regulation.

This was the first time not only in the NHL but in any of the major North American sports leagues — including the NFL, MLB, NBA, MLS and WNBA — that two teams played with winning streaks of 12 games or longer, according to Elias Sports Bureau research.

"Maybe we weren't at our best tonight, but we can't win them all," Granlund said. "Let's just get ready for the next one."

With balanced scoring, strong goaltending, tight defence, good speed and accomplished coaching, there's plenty in common between these fellow expansion teams born in 2000. Each team was playing well long before December, and eight of the top nine players in plus-minus rating are scattered between the two sides.

The crowd was another overflow sellout at Xcel Energy Center, a season-high 19,307 tickets sold, and the energy and intensity on the ice matched the moment.

The Wild had the first prime scoring chance, when Zach Parise failed to cleanly connect with a one-time attempt from the right circle and Bobrovsky whirled around for a diving glove save on the doorstep of the goal line. Atkinson got loose on a breakaway after a bad bounce for the Wild in the neutral zone for a 1-0 edge.

Wild left wing Chris Stewart fought with Anderson in the second period, with Stewart flapping his arms to fire up the fans as he skated to the penalty box. Then Dumba and Blue Jackets left wing Matt Calvert dropped the gloves during the clock stoppage, each drawing a game misconduct ejection.

"I thought our bench was 10 feet tall after that," Tortorella said.

The Blue Jackets needed only 76 seconds to push their lead to 3-0, with a wrist shot by Johnson and a tip-in by Atkinson.

"Right off the bat you could tell everyone's ready to go," Blue Jackets defenceman Ryan Murray said. "The fans are going nuts. The players are loving it. You have those two fights back to back. That's what hockey is. That's exactly why you play the game."

NOTES: Atkinson has nine goals and seven assists in the last 12 games. ... Columbus has won seven of the last 10 games against Minnesota. ... Until being outscored 3-1 by the Blue Jackets, the Wild owned a 44-22 advantage in the second period this season.

Columbus returns home to face Edmonton on Tuesday. After that, the Blue Jackets play 11 straight games against Eastern Conference teams.

Minnesota starts a three-game road swing at San Jose on Thursday. The Wild don't play at home again until Jan. 12 against Montreal.