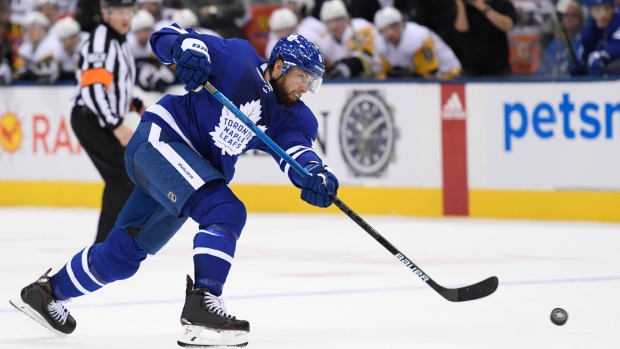 More than two months after Maple Leafs defenceman Jake Muzzin broke his hand blocking a shot against the Tampa Bay Lightning, the blueliner is completely healed and anxious to play again if the NHL can resume amid the COVID-19 pandemic.

“The hand is doing great; the body is feeling good. I'd say I'm pretty much 100 per cent ready to go,” Muzzin told reporters on a conference call Tuesday. “I’ve been getting treatment, and just working out, trying to stay ready like everyone else. My strength and mobility is all back and we're ready to go.”

Since he was injured when the NHL hit pause, Muzzin is one of the few players still allowed to visit team facilities for rehabbing purposes. But it’s been nothing like business as usual in those familiar surroundings.

“I was able to come in and get treatment because the finger in the hand wasn't fully healed [when the NHL shutdown],” he said. "There's only two people, three other people here. You have the whole arena to yourself, and it’s kind of an eerie feeling coming in. But I’ve been lucky and fortunate to get the work that was needed done to make sure I healed properly.”

A broken foot had already stolen a month of Muzzin’s season before the hand injury sidelined him again. He was also just one day removed from the Leafs announcing he’d signed a four-year, $22.5 million extension with the club, seeing the 31-year-old through to the 2023-24 season.

Another broken bone wasn’t exactly how Muzzin wanted to celebrate the news of staying the team he grew up cheering for in Woodstock, Ont. But Muzzin is grateful to not be a pending unrestricted free agent at the end of this league year, whenever or however that may come to be.

“We're really fortunate that we got a deal done before all this,” he said. “It's the uncertainty of the unknown that would be in the back of your mind. I don't know if guys are going to get what they think they should get, or if it's going to be fine, or if something is going to drastically change. Maybe you have to structure a deal differently. I think that would all weigh on me, and I think it's going to weigh on some guys.”

What’s on Muzzin’s mind now is how the NHL can get going again. He’s been monitoring the various scenarios put forth by the league office about resuming play, including the potential to have hosts cities where each division’s teams would isolate for six weeks or more while the regular season and playoffs finish.

That situation has raised concerns about players being forced apart from their families for too long, but Muzzin, a father to one-year-old daughter Luna, maintains there may not be a perfect solution.

“I do understand that you may be away from your family for a little bit,” he said. “But for me personally, I've been home for enough weeks now where maybe a few weeks away wouldn't hurt or wouldn't be too big of a deal. But different people and different families are in different situations. So you can see both sides of it. There's the other side, where young guys are ready to play and itching to get back at it, too. So we'll try and figure this thing out the best way we can.”

That take-what-comes attitude served Muzzin well in adjusting to Toronto in the first place. After he was acquired via trade from the Los Angeles Kings in January of 2019, Muzzin had to balance a responsibility to his new club with making sure wife Courtney - then pregnant with Luna - could settle easily back into their native Southern Ontario.

It took a few months to get comfortable, but Muzzin was confident going into this season that Toronto was the right place for him to be long-term. That sense of home has only been highlighted more over the past seven weeks that Muzzin has spent isolating, getting in plenty of family time while waiting on a return to normalcy.

“Coming into the year, we had gotten over the initial shock of being traded and being in a new city and we were growing some roots here. I feel like we've done that and we're excited for the next four years,” Muzzin said. “The direction the team is going, the personnel, the people, the organization, and the buzz in the city itself, we wanted to be here, and we felt the team wanted for me to be here and I'm glad.”