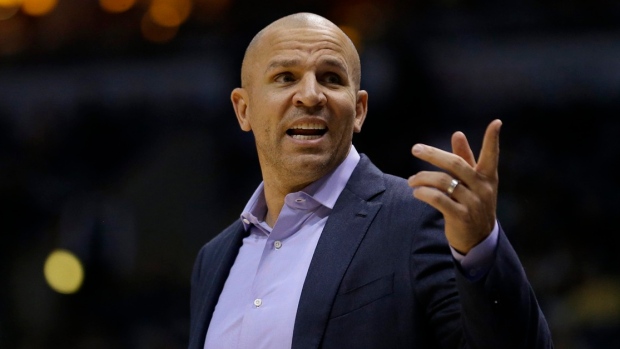 The Dallas Mavericks could be bringing back yet another familiar face.

According to ESPN's Adrian Wojnarowski, the Mavs are closing in on the hiring of a new general manager and Jason Kidd has emerged as a "strong frontrunner" to be hired as head coach.

The Dallas Mavericks are closing in on the hiring a new GM and Jason Kidd has emerged as a strong frontrunner to be hired as head coach, sources tell @espn_macmahon and me.

Last week, the Mavs announced they were bringing in future Hall-of-famer Dirk Nowitzki to assist with the head coach and general manager search. This comes after Dallas parted ways with general manager Donnie Nelson and head coach Rick Carlisle following their first-round elimination at the hands of the Los Angeles Clippers.

Kidd has previous head coaching experience with the Brooklyn Nets, Milwaukee Bucks and has served as an assistant under Frank Vogel with the Los Angeles Lakers the past two seasons.

As a player, the Hall-of-Famer had two separate stints with the Mavericks, beginning his career there in 1994 and returning in 2007, helping the Mavs defeat the 'big three' Miami Heat for the NBA Championship in 2011.

A 10-time All-Star and five-time assist champion, Kidd also spent seven seasons with the New Jersey Nets, five with the Phoenix Suns and one with the New York Knicks.