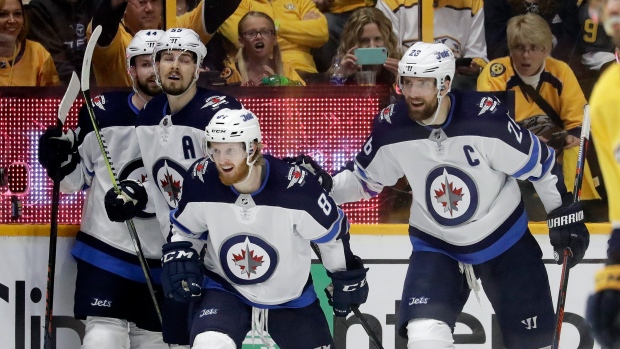 The Winnipeg Jets are hoping to avoid the distractions that come with being one win away from making the first conference final in the city's history.

"I'm not going to do much grocery shopping," captain Blake Wheeler joked.

"I don't think about it too much," rookie winger Kyle Connor added. "Try to stay focused.''

Good luck with that.

The Jets got to within one victory of clinching their second-round series with the Nashville Predators on Saturday after surviving an early onslaught before pulling away for a well-earned 6-2 road decision in Game 5.

Winnipeg had never seen one of its teams pick up even a solitary win in the second round before this spring. The old Jets, who bolted town to become the Phoenix Coyotes in 1996, got past the second round twice only to be cannon fodder for Wayne Gretzky's Edmonton Oilers in four-game sweeps in both 1985 and 1987.

The new Jets, formerly the Atlanta Thrashers until 2011, made the post-season for the first time in 2015, but were also swept aside by the Anaheim Ducks in the opening round.

Now this young, fast, resilient team is one victory from reaching the West final at what will no doubt be a thunderous Bell MTS Place on Monday night.

"We just have an unwavering confidence in ourselves," Wheeler said after Saturday's win at Bridgestone Arena. "I think we have that because of the depth we have."

Winnipeg was shut down by Nashville at home in a 2-1 loss in Game 4 as the Predators clogged up the neutral zone and frustrated the speedy Jets to tie the series 2-2.

But a couple subtle changes to Winnipeg's lineup — Connor was moved back to the top line with Wheeler and Mark Scheifele, while Nikolaj Ehlers returned to play alongside Paul Stastny and Patrik Laine — made a big difference in Game 5.

The first line combined for eight points, while the second unit pitched in with four.

It seemed like only a matter of time until Winnipeg's young guns of Connor, Ehlers and Laine left their mark on the series.

Connor, a rookie, scored the first two playoff goals of his career and set up another, while Laine (one assist) and Ehlers (two assists) had their moments.

Wheeler said despite the trio's struggles for stretches of the series, he never sensed any frustration.

"I haven't because we've been winning, for the most part," he said. "When you lose tough games and maybe guys that are used to contributing aren't contributing (as much), then you start to grip the stick a little bit tighter.

"But when a team is having success, especially at this time of the year, there are going to be guys that are going to step up and have big nights."

The Predators, last season's West champion, will need a big night to force a Game 7 back in Nashville on Thursday —something defenceman P.K. Subban guaranteed following Saturday's loss.

Predators head coach Peter Laviolette, whose club won this year's Presidents' Trophy, said he expects a response from his players in a series of highs and lows featuring the teams with the NHL's best regular-season records.

"This group's been built for a game like the one that's coming up," he said. "I've got a tremendous amount of confidence.

The Jets, meanwhile, have recent history on their side in close-out games at home after disposing of the Minnesota Wild in the first round.

But they also know the Predators won't go quietly.

"They fight to the very end every single game," Wheeler said. "We have a ton of respect for how hard they play.

"Eliminating them is not going to be an easy task. We're going to have to bring our best."