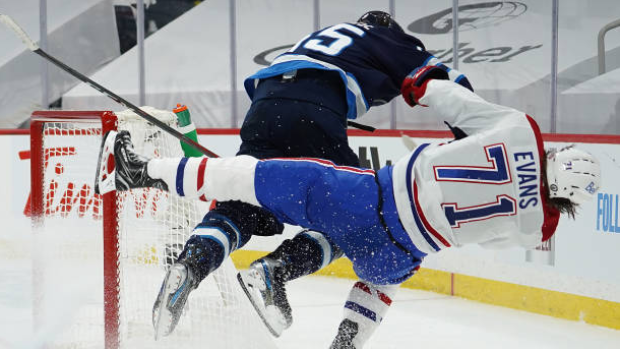 While it appears likely that Winnipeg Jets forward Mark Scheifele will face discipline from the league for his hit on Montreal forward Jake Evans late in Game 1, Canadiens defenceman Joel Edmundson said his team will have its own response if Scheifele returns to the series.

UPDATE: Scheifele will have a hearing Thursday for charging, the league's department of player safety announced.

Canadiens head coach Dominique Ducharme, who called the hit “vicious“ and “useless,” did not have update on Evans, but said he wasn't taken to the hospital after leaving the ice.

“No respect for the other players out there,” Kotkaniemi said. “I’m not saying anything more than that.”

Jets head coach Paul Maurice tried to defend the hit, but added the league was likely to get involved.

“Well, hopefully the young man is going to be all right,” Maurice said of Evans. “It’s such a highly unusual play because you’re backchecking back to kill and empty-net play, you’re coming full speed.

“When Mark stopped skating he kept his arms in. It’s a heavy, heavy hit. There’s no doubt about that. I’m sure the league will have its opinion.”

Scheifele, 28, has two goals and five points in five playoff games this year after posting 21 goals and 63 points in 56 games during the regular season.

He has no previous suspension history.