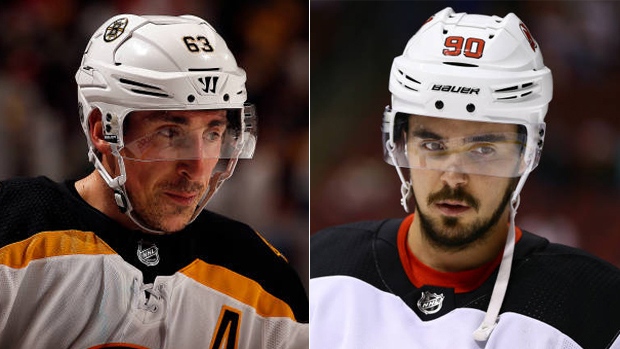 New Jersey Devils forward Marcus Johansson joined his teammates for practice on Monday for the first time taking a vicious elbow to the head from Boston Bruins forward Brad Marchand on Jan. 23.

After the team skate, Johansson sounded off the Bruins forward and the blow that left him with his second concussion of the season.

"It was stupid," Johansson told Corey Masiak of The Athletic. "There nothing else to say about it. There was no point in doing that. There was no hockey play whatsoever. It's sad to see there are still guys out there trying to hurt other guys. It's sad. It's stupid.

"I'm hoping it doesn't come to him ending someone else's career before it's enough. It's not why we play the game. There are obviously situations where you try to hit someone and make a hockey play and it goes wrong. Then there are plays like this that have nothing to do with hockey. It's sad to see. I guess I'm unfortunate to be on the receiving end of that."

The 27-year-old began off-ice work on Jan. 31 and returned to skating earlier this month, but his exact date for a return remains unknown. Devils head coach John Hynes said Monday Johansson is still several steps away from being medically cleared to play.

Marchand received a five-game suspension for the elbow, which Johansson feels wasn't enough to send the Bruins forward a message.

"Not really, considering this was the ninth time he's been suspended or fined," Johansson added. "Like I said, you hope that it doesn't come down to him ending someone's career before it's enough. That's all I can say. I'm trying to put that behind me and get back to feeling like normal again. That's all I can do."

Marchand initially said he wasn't sure what happened on the play, claiming he collided with Johansson after taking a shot. He later argued he was attempting to avoid contact, a defence that was unsuccessful with the league's department of player safety.

"While we acknowledge Marchand's argument that he is attempting to defend himself from oncoming contact, it is Marchand who initiates the contact on this play," the league noted in Marchand's suspension release. "This is not a defensive maneuver, made for Marchand's protection."

While serving his suspension Marchand said he was trying to shed the "dirty player" label.

“I’ve tried for a while now to try and get away from that role and I just can’t seem to escape it,” Marchand told NBC Boston. “I think obviously you look back on the last few years, I’ve turned into a decent player and it’s tough to be branded with that name consistently.

Johansson missed 13 games due to a concussion in November and has missed another 20 games with the latest injury. In 29 games with the Devils this season, Johansson has five goals and 14 points.

He was acquired by the Devils from the Washington Capitals in June for second and third-round picks in the 2018 draft.

Marchand returned to action on Feb. 7 after completing his suspension and has 12 goals and 30 points in 22 games since.