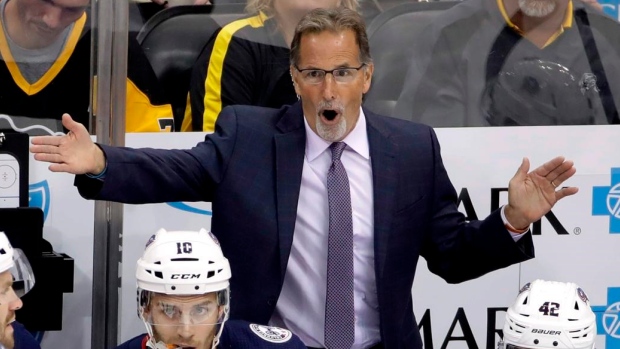 Columbus Blue Jackets head coach John Tortorella was fined $20,000 by the NHL on Wednesday for comments he made following a shootout loss to the Chicago Blackhawks in a shootout Sunday night.

Tortorella sounded off after the game over 1.1 seconds erroneously coming off the clock in overtime after the Blackhawks were called for a penalty, blaming "stubbornness" by the "officials and by the league" for not having the mistake corrected.

NHL Director of Hockey Operations Colin Campbell did not directly address the time coming off the clock on Monday, but he defended the referees and official timer before chastising Tortorella for his comments.

"What John said in his press conference was unprofessional along with unacceptable," Campbell said. "We are dealing with it and I have already had an initial conversation with both (Blue Jackets general manager Jarmo Kekäläinen) and John."

“The whistle is blown at 19.2 on the clock,” Tortorella said during his post-game press conference, “For some reason the clock is run down a second and a tenth to 18.1. Whatever reason, I have no g--damn idea.”

Columbus did everything they could to get the referees to check the clock on Sunday, but nothing changed. “So instead of resetting the clock, we have them tell our captain ‘we’re not going to do it.’ Toronto doesn’t step in, refs don’t do their freaking job and now we lose a game and we lose our goalie,” added Tortorella.

Columbus would go on to score what appeared to be the game-winning goal, but time had just expired and the goal didn't count.

With the goal not counting, the teams went to a shootout where Chicago picked up the win. To make matters worse, Blue Jackets goalie Joonas Korpisalo was injured and left following the second shooter. It was later announced he will miss four-to-six weeks with a knee injury.

“So the chain of events,” Tortorella added, “If it was done right, we don’t lose our goalie, we win the hockey game.”

“So all this g--damn technology, right?” Tortorella said, "The technology and getting things right… the stubbornness tonight, by the officials and by the league and by Toronto, however it’s supposed to g--damn work, screw us.”