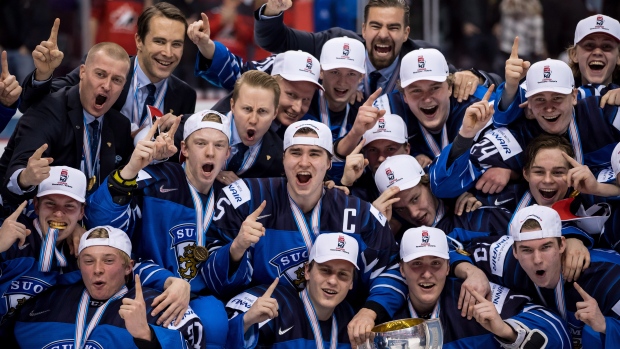 VANCOUVER — Jack Hughes still had tears in his eyes Saturday night as he talked about losing the gold-medal game at the world junior hockey championship.

"Right now, there's nothing I really want to learn from this," the 17-year-old said after Finland beat the Americans 3-2 in a dramatic finals performance. "It's sad. I don't want to go through this again."

Hughes is expected to go first overall at this year's draft.

Kaapo Kakko, who's expected to go second, scored the game-winning goal in the last minute-and-a-half of Saturday night's game.

"It was a great feeling. There are no words," the young Finn said through a translator.

Kakko's teammates gushed about his performance at the tournament and predicted that he'll be the one picked first by an NHL team come June.

"I think he's unbelievable. First tournament and he scores a goal like that? Unbelievable. It sums up his tournament, for sure," said Finnish captain Aarne Talvitie.

"He's so young but he seems like a third-year veteran guy out there. He don't fear anything," said Eeli Tolvanen, who played four games with the Nashville Predators last month.

"He's unbelievable. He's going to be the first overall for sure."

Finnish coach Jussi Ahokas called the teenage forward "a future superstar," but said his group won as a team on Saturday night.

"We were really tight. We have great personalities on the team. We grew up as a team," he said.

The win was special for Ahokas, who's been coaching some of the players for several years. He remembers being a skills coach for Talvitie when he was just nine years old.

"Kinda cool that he was here now," the coach said.

"It's been a long journey and we had such a great bunch of guys."

The win marks Finland's fifth gold at the tournament and comes after the team was eliminated from competition in the quarterfinals last year. They last won at home in Helsinki in 2016.

The Finns also got scoring from Jesse Ylonen and Otto Latvala, and strong goaltending from Ukko-Pekka Luukkonen.

The six-foot-five Buffalo Sabres prospect was named the tournament's top goalie after making 25 saves in the final.

"We showed at the end of the tournament why we are one of the best teams," he said.

"We have grown up as players and a group."

The Americans had clawed their way back from a two-goal deficit in the third period with goals from Josh Norris and Alexander Chmelevski.

Cayden Primeau stopped 28-of-31 shots for the U.S.

"At the end of the day it's about who stops the puck more. We didn't get that on our side so that's why we came up short," Primeau said.

U.S. coach Mike Hastings liked his team's resiliency and said his team was selfless throughout the tournament.

"Finland earned what they got tonight. We definitely tried. It wasn't from a lack of effort. It may have been a little bit of a lack of execution. But that happens in games like this."

The Americans lost a single game in the round-robin, dropping a 5-4 overtime decision to Sweden on Dec. 29.

They punched their ticket to the finals by beating the Czechs 3-1 on Wednesday, then downing the Russians 2-1 on Friday.

Finland's play was lacklustre in the group phase, where they lost to both Sweden and the U.S.

But they came into the elimination round with fire, beating Canada 2-1 in overtime in a heart-wrenching quarterfinal on Wednesday.

That game was a turning point, Luukkonen said.

"We kept playing better in every game. That was the biggest thing for us," he said.

"Every team that comes here comes to win the gold medal. We had our ups and downs in the tournament. In the end we got the gold medal so there is nothing more we can ask."

Next year's tournament will be held in the Czech Republic.

NOTES: Finnish forward Aleksi Heponeimi put up an assist in the win, marking his ninth point of the tournament. He tied with Russian Grigori Denisenko for the scoring title. ... The crowd of 17,206 at Rogers Arena exploded in cheers when Kakko scored the winning goal. Despite Finland ousting Canada from the medal round, many in the stands supported the Finns in the final. ... Ahokas missed the birth of his son on Wednesday. He said the world juniors championship trophy would be a good bowl to use in the boy's christening.