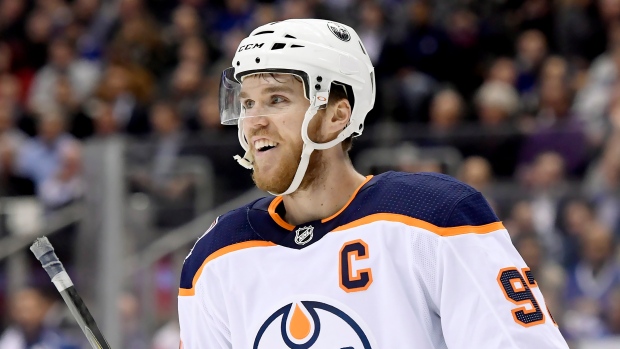 NEW YORK — Edmonton Oilers captain Connor McDavid is among the finalists for the Ted Lindsay award for a third straight season.

The NHL Players' Association announced McDavid as a finalist Thursday along with Patrick Kane of the Chicago Blackhawks and Nikita Kucherov of the Tampa Bay Lightning. The award is presented annually to the most outstanding player in the NHL, as voted by fellow members of the NHLPA.

The recipient will be announced June 19 during the 2019 NHL Awards.

Kucherov played in all 82 regular-season games to help the Presidents' Trophy-winning Lightning tie a league-best record of 62 wins, while capturing his first Art Ross Trophy. The 25-year-old scored a career-high 128 points to set a new single-season scoring record for the most by a Russian-born player.

McDavid played in 78 regular-season games for Edmonton, leading the team in scoring (116 points). He matched his goal total (41) from last season to earn a share of sixth place in the NHL and his 75 assists ranked second in the league and set a new career-high mark.