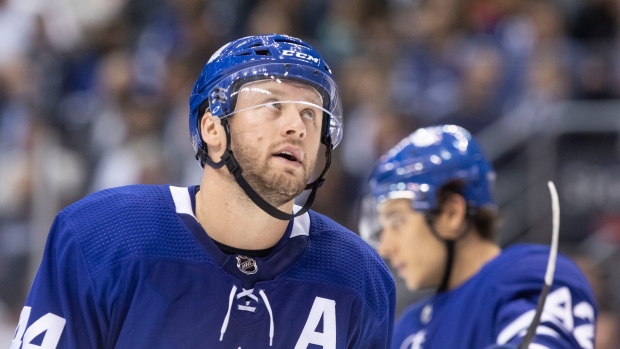 TSN Toronto reporter Mark Masters checks in daily with news and notes on the Maple Leafs. The Maple Leafs (optional) and Devils skated at Scotiabank Arena ahead of Tuesday’s game.

Morgan Rielly is using crutches and says he won't be able to put any weight on his fractured foot for at least a few weeks.

"Just part of the journey, I guess," the defenceman said. "It happens to everyone, I'm not going to be overly dramatic about it."

This will be the first significant absence in Rielly's NHL career. He'll miss at least eight weeks (23 games) before being re-evaluated.

"I don't know what the time frame is, it's a bit sensitive in terms of how the healing process goes," he said.

There is a silver lining as Rielly will be able to rest up after playing through another injury all season.

"You can put a spin on it," Rielly said with a smile. "I've been doing that, you try to take the opportunity to rest, heal other injuries, do what you can to prepare mentally to get back and be in a good place."

Rielly leads the Leafs in ice time logging 24:15 per game while playing on both special teams units.

"We've always talked about depth being a strength of ours," Rielly noted, "and when that gets tested it's time for guys to accept that responsibility and prove that and I think that's what the challenge will be."

Toronto is already without Jake Muzzin, who is week-to-week with his own broken foot.

"The elite teams in the league don't get fazed by these types of situations," said head coach Sheldon Keefe. "And we want to be an elite team. We believe we are an elite team and have the ability to take big steps as a group."

Keefe says Muzzin may be able to skate Wednesday for the first time since sustaining his injury on Dec. 27.

With Muzzin and now Rielly out, Toronto's defence will start tonight's game looking like this:

Sandin is back in the NHL for the first time since playing six games in October.

"I gained some confidence since getting sent down and going to World Juniors," the 19-year-old Swede said, "so I feel prepared and looking forward to tonight."

It's been a whirlwind week and a bit for the teenager, who had only one day at home after the World Juniors before heading out on a road trip to Texas with the Marlies. His bronze medal is still sitting on the counter at home.

Sandin, who was named the top defenceman in Ostrava, played for Keefe in the AHL and will benefit from knowing the ins and outs of the coach's system.

"Our team's playing differently than the last time that he was here," Keefe pointed out, "and I think that's going to suit his game well. The defensive part of it is going to be his challenge and where we'd expect him to show some growth."

Timothy Liljegren has also been called up from the Marlies, but Keefe says there's no plan to have the 20-year-old make his NHL debut this week.

Rielly's usual partner, Barrie, will now be leaned on even more.

"With the guys we have out there's a lot more emphasis of course on Sandin and Dermott and Holl and those guys, but Barrie’s a guy we need more from," Keefe said.

Barrie was on the ice for four goals against on Sunday against the Panthers and believes the improvements have to start in his own end.

"I have to do a job of continuing to push the pace offensively, but then stepping up my defensive game as well and focusing more on that," Barrie said, "and trying to help where I can in areas where Mo would have."

Dermott is still getting used to playing against top players on a night-to-night basis.

"They're obviously more skilled, bigger, more dangerous guys, but you kind of psych yourself up for it too," he said with his trademark smile. "But if you have good support and you're playing well as a team, it's just hockey."

The problem is the Leafs haven't been playing good team defence of late. Certainly not on Sunday in an 8-4 loss to Florida.

"Maybe toning back the excessiveness with how much we're jumping," he said of one possible team-wide adjustment, "and focus on our roles initially and then if the opportunity arises then jump instead of kind of forcing it."

Keefe expects the entire team to be locked in on defence considering the injury issues.

"There's definitely some heightened awareness to it, which I think is a healthy thing for our team," the coach said. "It's a good opportunity for us to rally as a group here."

It's been a disappointing season for the Devils and their big off-season acquisition P.K. Subban. The defenceman has just five goals and five assists through 45 games.

"We're halfway through the season and, if I can be honest, probably the past eight, nine games have been the most comfortable that I've felt since I’ve been here," Subban said. "Personally, it’s been tough for me to get in a rhythm. And, now, just being on the power play regularly, I mean, my last game I think I played 26, 27 minutes, game before that played 21 ... Those (are the) key situations that really define me as a player throughout my whole career and being in those situations has helped me over the past little while to get my game in order."

It's been tough, Subban says, to play to his identity, especially with the Devils getting off to an ugly 0-4-2 start.

"You get behind the eight ball and you have to try to almost change the way you play to try to make sure that the puck doesn't go in the net," Subban explained. "I'm a guy that likes to play at both ends of the ice and for a fair part of this season it was just trying to defend and really slow the other teams down and things changed. There's different D pairings, there's different combinations on power plays, penalty kills and those are things I don't control."

Traded twice in his career, Subban made it clear he's committed to seeing things through with the Devils, who have fired coach John Hynes and general manager Ray Shero this season.

"In my career, to this point, I've never asked for a trade and maybe I'm a little bit old school that way," the 30-year-old said. "I've learned from a lot of veteran players in the league that put their head down, come to work and do their jobs."

Subban is optimistic because of New Jersey's young talent, including first overall pick Jack Hughes. The American has just six goals and 11 assists so far, but Subban is sold on his potential.

"You know what? The people that know hockey know," Subban said. "So, people on social media that want to talk about point totals all the time, I mean, I'm a guy who's had seasons where I've had maybe 40 points or 60 points and, you know, at the end of the day, it's how your team does, how you fit in within that team, what style of team you play on. There's guys who are going to get their 60 or 70 points every year, because the team they play on. It’s the way it is, especially in today’s NHL to get points you have to be on good teams and playing with good players. You have to be a good player yourself, but you have to have good players around you. For us, we’re a young team, there’s a lot of great players on this team, but (they) are young and still developing and I think for Jack the point totals, I don't think he has to worry about his numbers. His numbers will come."

Hughes spent a good chunk of his childhood in Toronto, because his dad worked for the Maple Leafs organization. Jim Hughes served as an assistant coach with the Marlies (2006-09) and then as the director of player development with the Leafs (2009-15).

"Very exciting," said Hughes of tonight's tilt. "The building I kind of grew up in. Probably the most excited I’ve been for a road game, for sure."

"It was tough times when I was here, not much winning, but that Boston year (2013) was great. I went to one of the playoff games and that was a lot of fun."

William Nylander actually lived with the Hughes family for a couple weeks shortly after being drafted by the Leafs.

"He played ping pong with us like it was his job every day," Hughes said with a smile. "He's a great guy. Haven’t talked to him a few years, but will be fun to play him tonight."

Despite putting forth a lacklustre effort on Sunday and having Monday entirely off, the Leafs didn't hold a full skate this morning.

"My general philosophy on the morning skates is to not put our team at a deficit when it comes to our energy levels not just for today, but if you look ahead at what the schedule is for the week," Keefe explained. "We're trying not to focus on the one day, but what's ahead."

The Leafs have practices planned on Wednesday and Friday ahead of games Thursday (Calgary) and Saturday (Chicago).

"Generally, when you take an off day, the sense is you do have a morning skate the next day, but we find that kind of defeats the purpose a little bit, because you start to eat away at some of the energy levels that you've restored over that day."

Under Mike Babcock, the Leafs almost always held a morning skate if they played a game following a day off.

Keefe says the players have responded well to the new policy and pointed out that some guys actually showed up Monday for a skate on a day off. He wants to leave it up to the individual players to decide what they need.

John Tavares, for example, was among the 12 players on the ice this morning, because he wanted to do some extra work with skating consultant Barb Underhill.

"At this stage of the season and likely going forward, we're more focused on their overall workloads," Keefe said.