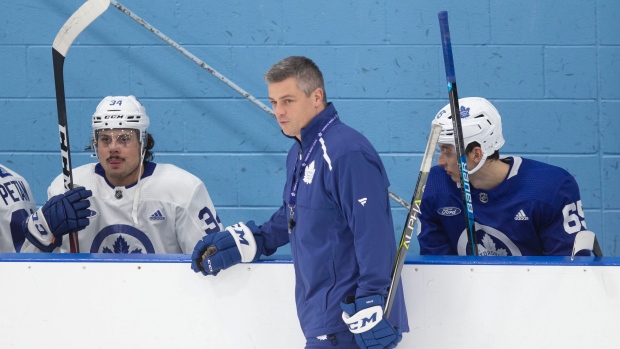 TSN Toronto reporter Kristen Shilton checks in daily with news and notes on the Maple Leafs. The team held an 11 a.m. practice at Ford Performance Centre on Thursday.

It was four weeks ago that Sheldon Keefe stood behind the Maple Leafs’ bench for the first time as the team’s head coach, replacing Mike Babcock in a 3-1 win over the Arizona Coyotes.

Toronto is 8-4-0 in the 12 games since Keefe took command, and decidedly on the upswing compared to where they were. But at the same time, Keefe feels the honeymoon has come to end.

“It's different [from back then] in the sense that when you first arrive, it's fresh, it's new and that kind of carries you through the first little bit,” Keefe said after the Leafs practice on Thursday. “And then over time things settle down and then you kind of get back into the grind of the season. But things just have settled in and they seem relatively normal now.”

The fact Toronto has played nine of these first 12 games on the road wasn’t ideal for a new coach trying to find his bearings, but the bigger focus for Keefe is to continue to have his players buy in to what he’s preaching.

“There's more of a challenge in terms of just engaging the group and keeping them going,” Keefe said. “Because now it's a lot of the same type of messaging coming at them, and we're still kind of working at it, so it's just staying with it.”

Keefe mentioned after Tuesday’s 5-3 win over Buffalo and again on Thursday that Toronto is still very much a work in progress, regardless of the good results. The Leafs have now won four of their last five games going into Friday’s tilt against the Rangers, and have outscored opponents 20-11 over that stretch.

When Keefe stepped in for the Leafs, he was heralded as a coach who would allow his offensive players freedom to do what they do best. Auston Matthews, for one, has liked what he’s seen in that respect.

“I think our offence has really come back to life,” Matthews said of the biggest change since Keefe took over. “I think just getting everybody kind of involved and engaged in the zone and just letting our instincts kind of just take over and not really having anything set. Try to keep a net presence but just trying to have guys coming through, not just staying on the perimeter, but coming through the middle at all times.”

Matthews scoring has been somewhat streaky in the last month – he scored in back-to-back games out of the gate under Keefe, then went five games without lighting the lamp, and now has four goals in his last five outings.

Part of that inconsistency could be attributed to his changing wingers, which have included Andreas Johnsson (currently sidelined with a leg injury until after Christmas), Pontus Aberg (recalled from the American Hockey League to play two games on Matthews’ flank) and now Kasperi Kapanen.

Even still, Matthews hit the 20-goal mark with a pair in Tuesday’s win, joining Dave Keon as the only players in Leafs’ history to score 20 or more goals in at least their first four seasons with the team (Keon did it in his first six seasons).

“It’s just confirmed what I already knew in terms of his talents and his game-breaking ability,” Keefe said of coaching Matthews. “But I also know [now] that he has a great mind, a great intelligence for the game, and is passionate about it in terms of watching and learning about himself and about other players, and he wants to do really well and he wants our team to do really well. So all those things are very healthy and are going to help us going forward.”

To really get rolling, Matthews needs more help from his linemates William Nylander and Kapanen in earning offensive zone time. Over their last five games, Nylander has just two assists and Kapanen has one, but Nylander feels like they’re close to a breakthrough.

“I think we're starting to click,” Nylander insisted. “I think last game was a better game for us. We got to build off of that. It's more getting into the o-zone through the neutral zone and stuff like that, which will allow a little more creativity there.”

Once they do have possession, Matthews wants to see his line do a better job of maintaining it.

Those are goals Keefe shares for Matthews’ unit, and the 22-year-old said it’s been “great” having the new coach on board.

“He's an easygoing guy, as far as just communicating with one another and communicating with the team and the players, the leaders,” the Leafs’ alternate captain said. “He's got a lot of experience. He's done extremely well everywhere that he's coached. Obviously it's only a month in, but so far so good.”

If his career to date has taught Adam Brooks anything, it’s to never look too far into the future.

The 23-year-old forward went undrafted twice before Toronto selected him in the fourth round, 92nd overall, in 2016. Then he had to slowly work his way up the Toronto Marlies’ ranks, from a primarily fourth-line player to top-six contributor.

His early season pace in this campaign with the Marlies – 14 points in 18 games – finally earned Brooks an NHL call-up earlier this week, and he admits the wait for his opportunity really wasn’t all that difficult.

“I don't think it was too tough. I've played the patient game my whole career,” Brooks said. “I had to wait a couple years to get drafted and then this [took a while], so guys were going up and I was extremely happy for everyone that got that opportunity and it's just nice to get a look.”

Brooks was recalled, along with Martin Marincin, on Thursday morning as the Leafs gathered more information on players dealing with injuries.

Trevor Moore was expected to return to Toronto’s lineup on Tuesday after being medically cleared from a shoulder injury he suffered on Nov. 15, but a bump he took in practice on Monday left him feeling uneasy, so Brooks was brought up on an emergency basis to fill in if needed.

While Keefe said Moore is available to play now, he still wants to keep Brooks around a little longer.

“We wanted to have an extra body around and I think he's earned it,” Keefe said. “He's played very well, not just this season but going back the last two seasons. He's really taken big steps and it's nice to see him around here and give him a little extra experience and a chance to get comfortable here so in the event that we do call on him here in the future that he's further along.”

In terms of how he’s progressing at the AHL level, Brooks points to an increased confidence to his game.

“Entering your third year, you know you're relied on more and you’re expected to do more,” he said. “Whether it comes with carrying the puck through the middle, or playing a little heavier down low now that I'm more comfortable playing against older guys. So that's all things that you try to work on and you try to adjust your game and I feel like I've made good strides in all those areas and it's because of guys like Sheldon and the development staff around here.”

Brooks doesn’t hold back when singing Keefe’s praises, and would relish the chance to play for him again at the NHL level.

“He's one of the best coaches, if not the best, that I've ever played for,” Brooks said. “I came in and my first year was a little tough, things were a little hesitant early on and he just stuck by me and made me feel comfortable, made me feel good and I can't say enough great things about Sheldon. It just shows the type of coach he is, coming in here and these guys being successful. I'm happy for him, we all are over there, and it's nice to just see him every day again.”

Ending any speculation early, Keefe confirmed on Thursday that Michael Hutchinson will get the start for Toronto on the second half of their back-to-back at home on Saturday against Detroit.

It will be Hutchinson’s first start since a 6-4 loss to the Buffalo Sabres on Nov. 29 that put the goalie’s record to 0-5-1 on the season with a 4.55 goals-against average and .876 save percentage.

Hutchinson was denied a scheduled start on Dec. 4 by Keefe’s allowance of Frederik Andersen’s request to play both halves of that back-to-back. Keefe also gave away another projected start for Hutchinson in Calgary on Dec. 12 because of how well Andersen had played two nights earlier with a 38-save performance in Toronto's 4-1 win over Vancouver.

“We wish we could have gotten Freddie a break in there,” Keefe admitted. “Since then, the schedule has been fine for us, but this is another opportunity for [Hutchinson]. He's had an excellent stretch of practices here, much like he had even when he was scheduled to start there. He was feeling good and looking good in practice and his demeanour has been really good, feedback from [goalie coach] Steve Briere has been excellent. So, I'm sure he's anxious to play.”

That may be something of an understatement, but the journeyman goaltender has done his best to stay positive in the face of a difficult season.

“There's no tension,” Hutchinson said. “You can always game plan for things but there's always stuff that happens and things change. As you get older, you realize that it's really day-to-day. I understand. [Keefe] knows those were important games. Freddie was rolling, he played unbelievable in Vancouver. As his goalie partner, when he's playing like that, it's fun. Even when you're not feeling like a huge part of it, it's about having joy in other people's success, and when Freddie is playing great and the team is winning and stuff, I'm enjoying that too.