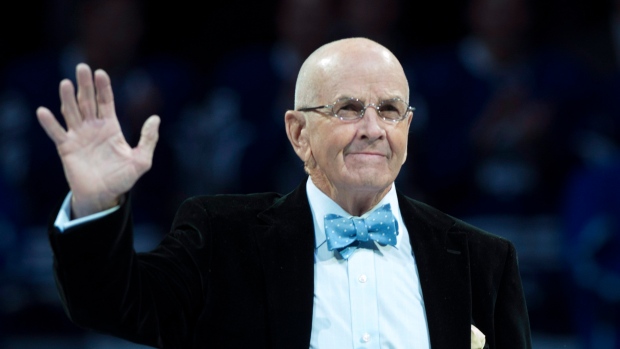 The Toronto Maple Leafs added bronze statues of Dave Keon, Tim Horton and Turk Broda to the exhibit, bringing the total to 10.

Keon, 76, spent 15 years of his career in Toronto, winning four Stanley Cups, one Conn Smythe and the Calder Trophy. The captain amassed 365 goals and 493 assists for 858 points over 1062 games with the Leafs.

"I thank you for making me 29-years-old forever." Dave Keon on the artists of Legends Row. #TMLtalk pic.twitter.com/NZniTdkWyl

Horton, a Leafs defenceman for 20 years, tallied 109 goals and 349 assists over 1185 games in Toronto. He helped the Leafs win the Cup on four occasions as well. Broda spent 14 seasons between the pipes for the Leafs, winning five Stanley Cups and two Vezina Trophies in the process.

The Leafs' centennial celebrations continue Friday when they unveil the Top 100 players of all-time followed by Saturday's home opener against the Boston Bruins.