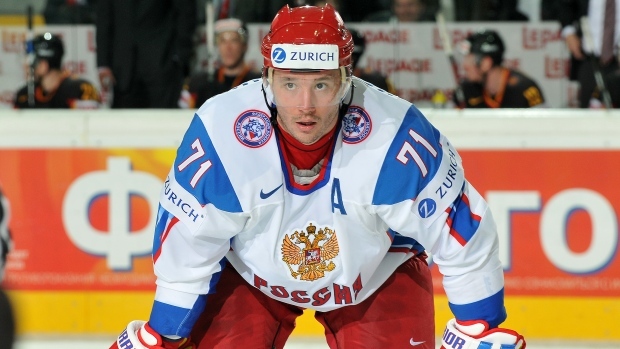 Dreger reports that agent JP Barry is in discussions with teams interested in bringing Kovalchuk back to the National Hockey League.

CAA Hockey will be busy in weeks ahead. Ilya Kovalchuk added to a UFA stable that includes John Tavares.

JP Barry in discussions with teams interested in bringing Kovalchuk back to the NHL. https://t.co/bM0XHNTuPr

Fellow TSN Hockey Insider Pierre LeBrun said in a tweet that Kovalchuk can't officially sign with an NHL team until July 1 but can agree to terms with a club at any time. LeBrun adds that as an over-35 player, a deal is likely to be bonus-laden.

Kovalchuk can't sign with an NHL team until July 1 but can agree to terms anytime. As a 35 and over guy, likely a bonus laden deal. https://t.co/GMe3mBMOjZ

Kovalchuk, 35, last played in the NHL for the New Jersey Devils in 2012-13 before retiring from the league to play in the Kontinental Hockey League in his native Russia. He has since played six seasons with St. Petersburg, and tallied 31 goals and 32 assists in 53 games last season.

He was a member of the gold medal-winning Olympic Athletes from Russia entry at the Pyeongchang Winter Games in February.

A Russian report in April stated that Kovalchuk was plotting a return to the NHL and wanted to play another two or three years.

When Kovalchuk turned 35 on April 15, he was removed from the NHL's voluntary retirement list and became an unrestricted free agent. The Devils had retained his rights before that point because he left the team in the middle of a long-term contract.

Kovalchuk appeared in 816 career NHL games over 11 seasons with the Atlanta Thrashers and Devils. The first overall pick in the 2001 NHL Draft notched 417 goals and 399 assists and was a co-winner of the 2004 Maurice "Rocket" Richard Trophy as the league's top goal scorer.