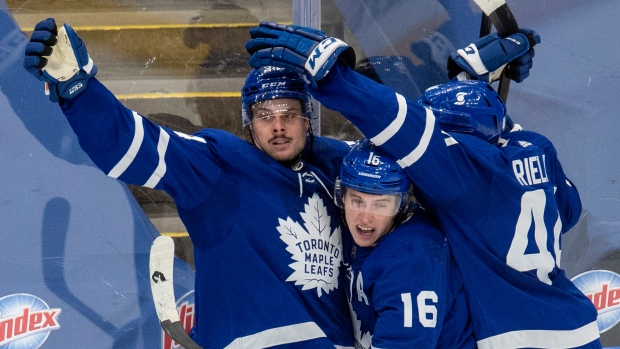 TORONTO — The Maple Leafs’ power play would like a do-over.

What used to be one of the deadliest man advantages in the NHL has gone shockingly cold in the last month. It’s so bad that after Wednesday’s 0-for-5 outing with the extra man against Winnipeg, Toronto's power play dropped to 31st in the league (at 1-for-28) since March 4.

Coach Sheldon Keefe refused to even address those struggles with reporters following Wednesday’s 3-1 win. Not until after Thursday’s practice session, which included ample special teams work, did Keefe outline the Leafs’ return-to-basics plan for the power play.

“We’re really focusing now on getting ourselves back to what our identity was to start the season,” Keefe said, “which is two true units that are going to be fresh and are going to have legs and going to have urgency and going to push and compete with each other for the opportunity to get out on the ice. So that’s part of it, and then we're just trying to get the puck snapping around and get [the players] feeling good.”

The Leafs’ power play wasn’t always so abysmal. When Toronto completed its three-game sweep of Edmonton on March 3, the power play ranked second overall in the NHL at 32.5 per cent. The Leafs were averaging a middle-of-the-road 3.21 power play opportunities per game, and still produced 25 goals with the extra skater in 24 games.

Fast forward to Wednesday in Winnipeg. Toronto had gone eight straight games without a power play goal, and then failed to convert on three chances in the first period alone against the Jets. Keefe was rolling out new looks for his units, and had added Alex Galchenyuk to the second group, but those alterations yielded no better results.

By game’s end, the Leafs had hit rock bottom: they are now worst in the NHL on the power play since March 4, with a measly 3.6 per cent success rating while averaging just 2.33 opportunities per game.

“Last night we tried to really take two pieces from each unit, with [Auston] Matthews and [Mitch] Marner and [John] Tavares and [William] Nylander going together,” Keefe said. “Didn’t like that, or the way that it went. The biggest focus [at practice today] was just reorganizing our units. We've really gotten away from what was successful [before]. We've gone through different phases here and we've really been chasing it for the last handful of games so we changed a number of different things.”

First year assistant coach Manny Malhotra is in charge of Toronto’s power play, and he was commanding those new-look units on Thursday. The Leafs shook things up by sliding Wayne Simmonds back onto the top unit with Morgan Rielly, Matthews, Marner and Tavares, and then inserting Jake Muzzin for TJ Brodie to quarterback the other group with Nylander, Joe Thornton, Jason Spezza and Zach Hyman.

Malhotra has unsurprisingly taken some heat over the power play’s recent nose-dive. But Tavares said the former Vancouver Canucks’ assistant is providing all the right tools for Toronto’s return to success.

“I think Manny has done a great job of keeping us organized and and well-focused and adapting and making sure that we're focusing on the right things,” Tavares said. “Sometimes it doesn't go your way so we’ve just got to stay with it. We know we've got to be better in some areas but I think there's been times when we've done a lot of good things and haven't been rewarded. Certainly last night we could be a lot better than we were, but you just stay with it.”

Toronto has 20 regular season games remaining to figure things out. According to the Leafs’ top power play skaters, it’s just a matter of getting that first slump-busting goal to go in. Everything will flow from there.

“You’re just staying confident,” said Marner, who leads Toronto with 13 power play points. “We’ve got the skill out there to do some pretty great things. Stuff hasn't been dropping, but we try to go out there with the same energy every single time. We have to get our consistency back. We're just getting pucks there [to the net], getting bodies there. Eventually one is going to drop.”

In order to get there, more pucks actually need to make it on net. Toronto has put only 37 shots on net over its last 28 power play attempts, 10 of which came from Matthews alone.

“I think that there are periods of time where we are passing around the perimeter and trying to get a play that we like and we just kind of wait too long,” Rielly said. “We worked on it today [at practice], just trying to get pucks to the net, and just really focus on keeping it positive and just trying to create opportunities by getting rebounds and shots.”

The Leafs will get another crack at the Jets on Friday to put their plan into action. It was actually nine games ago against Winnipeg that Toronto last scored a power play goal. Now if the Leafs fail to deliver with the extra man in one more outing, the drought will hit an alarming double-digit game total.

But there’s still time to prevent that.

“With the guys we have on the ice, stuff is going to start dropping eventually,” Marner said. “We're just going to make sure we stick with it, continue to work on it. Make sure we're on the ice for those power plays and working extremely hard and trying to get the puck back on opportunities where we can.”​​