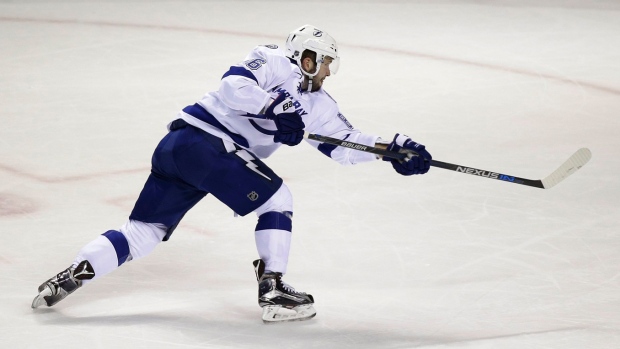 Nikita Kucherov sounded off on his Tampa Bay Lightning teammates in a recent interview with Russian paper Sovietsy Sport.

Kucherov, who scored a career-high 40 goals and 85 points in 82 games this season, said some of his teammates got paid and stopped working because they didn't face competition for their jobs.

"Some guys overstayed in team," Kucherov told the Russian outlet, as translated by the Tampa Bay Times. "They've got their money and stopped working. They knew there's no competition for their positions and the organization is not going to take someone else. They played not really well this year. You can see it in their stats and way of play. When we played together and I made a pass, they even were not expecting this. That's why this season was hard for me despite good stats."

The 23-year-old blamed the team's coaching staff for mixing up the lines too much once Steven Stamkos suffered a season-ending knee injury.

"We had great chemistry with (Vladislav) Namestnikov and Stamkos at the start of the season," Kucherov added. "We understood each other really really well. And then Stamkos was injured, I was very upset. I think those nine games were my best in the NHL. After that coaches started shuffling lines. Partners were changing like in a kaleidoscope. It was very hard to get used to it, because guys didn't play at Stamkos level. It's hard to explain how I played with them. We had a lack of understanding of each other and there were some problems.

"I was suffering torments all season, because I couldn't find perfect chemistry with other partners after Stamkos injury. We played with Jonathan Drouin once, and it was good. But coach didn't put us together again for some reason."

Kucherov's agent, Dan Milstein, confirmed to the Times that the comments did indeed come from the Lightning winger. Milstein said Kucherov made the comments out of frustration after missing the playoffs. He said his client Kucherov respects both Lightning head coach Jon Cooper and general manager Steve Yzerman and wants to stay with the Lightning long-term.

Kucherov, thru agent, said quotes came out of frustration from no playoffs. Respects staff, SY, but didn't feel every player on board to win

"He hopes to play for one team," Milstein told the Times. "Like his GM."

Yzerman did not appear to be a fan of the comments when asked Wednesday.

"My own feeling is we prefer to deal with any potential issue internally" Yzerman told the Times. "I'm not going to make a big deal out of everything. Kucherov is a great player, been a great teammate. And we'll get things sorted out after the World Championships."

Kucherov signed a three-year $14.3 million contract prior to this season. He is currently slated to become a restricted free-agent after the 2018-19 season.

He will represent Russia at the World Hockey Championships next month, along with teammate Andrei Vasilevskiy.