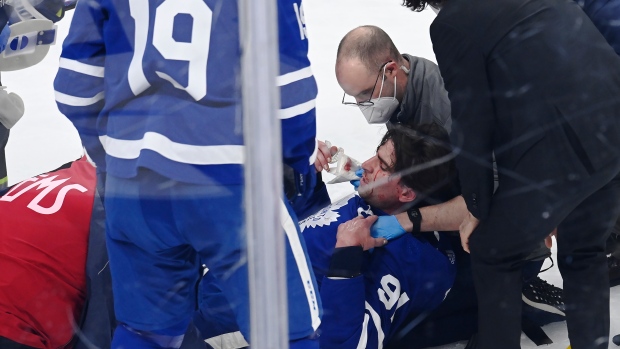 TORONTO — John Tavares did not suffer any structural damage to his head, neck or spine in a scary on-ice collision during Game 1 of the Maple Leafs’ first-round playoff series against Montreal on Thursday.

That was part of a medical update provided Saturday by Leafs’ general manager Kyle Dubas amid Tavares' ongoing recovery. Toronto’s captain was stretched off the ice midway through the first period on Thursday after taking a hit from Canadiens’ defenceman Ben Chiarot and then an accidental knee to the head from forward Corey Perry.

Dubas confirmed Tavares did sustain a concussion, and revealed Tavares also suffered a knee injury that will require a minimum of two weeks to heal. There is no timeline attached to Tavares’ return from the head injury though, and he remains out of Toronto’s lineup indefinitely.

“We will handle [Tavares' concussion] in a very conservative [way] and handle it very sensitively,” Dubas said. “We will follow the protocols to a tee with that. We can't repair [a head injury] so we have to be very careful and keep in mind that he's got a young family [of two sons] and there's an onus on us to protect him and his future in that regard.”

Tavares was transported directly to St. Michael’s Hospital in Toronto following the on-ice incident Thursday, and remained there overnight after being cleared of any structural problems.

Cameras captured Dubas rushing to the ice surface as soon as Tavares was levelled by Perry’s knee to the head. Dubas was on the phone almost immediately, and said his goal in that moment was to provide insight to Tavares’ family, including wife Aryne.

It was an eerily familiar situation for Dubas to find himself. During a game against New Jersey in December 2019, forward Ilya Mikheyev had ligaments in his arms slashed by an errant skate blade and had to be rushed to a local hospital. Last August, Jake Muzzin was cross-checked to the ice during Game 2 of the Leafs’ qualifying-round series against Columbus and was also stretchered off and taken to hospital.

Dubas accompanied both players to seek medical attention, even remaining for days in New Jersey with Mikheyev as he underwent surgery and was released. It’s a spot Dubas hopes not to be in again, but he knows what’s needed from him when such things happen.

“They need someone to be the conduit between them and our medical staff,” Dubas said of contact player’s families. “I would never want the family to not be aware of what was happening. You care about the player deeply, and what their status is, but also to be able to provide updates to the player’s family [when] they're watching that from home and seeing it. It’s a very helpless feeling, so immediately you want to make sure that we're doing everything we can do to be there for them.”

Something Dubas was upset about the day after Tavares’ scene was how it was depicted on the front page of the Toronto Sun. Friday’s Sun cover featured a bloodied photo of Tavares with the caption “Captain Crunched.”

“Their newspaper crossed the line,” Dubas said. “We found the cover to be disgusting. We just thought that it was extraordinarily insensitive on the part of the Sun, with regards to the photo, and the caption that accompanied the situation yesterday. Just [a] complete lack of compassion and respect.”

The Leafs will now have to forge ahead without Tavares for the time being. After Toronto dropped Game 1 of its opening-round series 2-1 on Thursday, they’ll have a chance to even the score in Saturday’s Game 2.

Coach Sheldon Keefe made his lineup adjustments at Friday’s practice, moving Nick Foligno into Tavares’ second line centre spot and adding wingers Alex Galchenyuk and Pierre Engvall to the mix. But Dubas’ concern is less about how the Leafs will operate on the ice moving ahead than how they’re mentally handling the aftermath of Tavares’ injury.

“They're doing as well as they can be supporting one another and we're trying to support them,” said Dubas. “I think these things are tough. I think a lot of people view athletes as [being] difficult to knock down and difficult to keep out and to see something happen in a completely accidental freak situation like that, it makes everybody feel vulnerable, especially the players. They’re big, strong young guys and you don't ever imagine being in that situation so I think it creates a sense of vulnerability.”

The loss of their captain has seemed to bolster the Leafs too, though. Morgan Rielly said after Friday’s loss that the team will be “thinking about Tavares every day until he’s back” and that the Leafs will try and “win for JT” so he can eventually re-join them on this playoff push.

“When you see [what happened], [it’s like] everything after a moment of trauma, where there's some trepidation,” Dubas said. “And things sort of slowly start to return back to normal. I think our guys are handling it as well as possible. The outpouring of support has been remarkable.