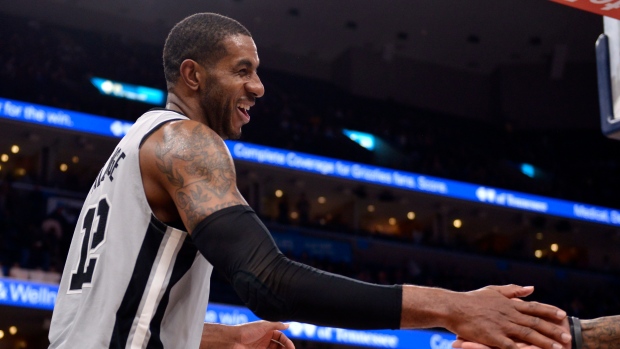 MEMPHIS, Tenn. — The San Antonio Spurs scored early, often and at a season-best shooting pace both overall and from 3-point range.

The combination, along with 40 points from LaMarcus Aldridge and 26 points, plus 10 assists from DeMar DeRozan, contributed to a 145-115 rout of the Memphis Grizzlies on Monday night.

San Antonio shot 67.4% overall, 62.5% from 3-point range and recorded its season-high point total. DeRozan would miss only one of his 11 shots; Aldridge was 17 of 25 from the field. The 67.4% from the field was the best shooting percentage in an NBA game this season. The 36 assists also were a season high.

“It was just one of those nights,” said Aldridge, who also had nine rebounds and five assists. “We’ve had nights where we’ve been on the other end of it, where we couldn’t throw it in the lake.”

“They played unbelievable tonight,” Memphis coach Taylor Jenkins said, later adding: “They had a response for everything we were throwing out there coverage-wise, schematic-wise. …They had a heck of a shooting night, especially from the midrange, the rim, the 3s, all that.”

Trey Lyles finished with 17 points and Dejounte Murray scored 14 for the Spurs.

Jaren Jackson Jr. scored 22 points for Memphis, converting 8 of 14 shots and 6 of 9 from 3-point range. Rookie Ja Morant finished with 19 points, and Jonas Valanciunas had 18 points and 12 rebounds as Memphis lost for the third time in the last four.

The Spurs were uncanny in their shooting accuracy from the start, connecting at 79% in the first quarter — and that included missing their final two shots in the period. While San Antonio couldn’t keep that pace, it dropped only slightly. The Spurs were 31 of 42 in the second half (73.8%) and made 7 of 12 3-pointers.

“It is just about letting that build our confidence,” DeRozan said. “Go out there and be consistent. Go out that and play like this – especially on the defensive end – every single night.”

With the Spurs shooting, Memphis never really had a chance at overtaking San Antonio once the first-quarter lead reached 19. There were a few times the Grizzlies got the deficit under double-digits in the second half but never less than eight. The San Antonio lead eventually swelled to the final 30-point margin.

“They have a lot of shooters,” Morant said. “All shot it great. It’s hard when they are hitting a lot of shots. … It’s rare for a team to shoot how they shot.”

Spurs: Hit 19 of their first 22 shots. The streak of made baskets went so long that once Aldridge missed a shot late in the first quarter, it drew a loud cheer from the Memphis faithful. … Aldridge reached at least 30 points for the fourth time this season. … Marco Belinelli had 10 points.

Grizzlies: Valanciunas returned to the starting lineup after missing Saturday’s game against Sacramento with right foot soreness. He recorded his 16th double-double. …The 145 points given up by Memphis were the most this season. The previous high was 138 by Dallas on Nov. 9.

NOT THE WORST NIGHT

The 30-point loss was not the worst of the season for Memphis. The Grizzlies lost by 32 at Orlando, 118-86, on Nov. 8. “Defence is the thing we hit all the time,” Jenkins said. “Not trying to downplay this, but it’s been 30 games and this is the first time (in a while) that we’ve gotten our rear end handed to us.”

The Spurs were in a similar situation to the Grizzlies on Saturday when they lost at home to the Clippers 134-109. And, even a coach of few words, like San Antonio’s Gregg Popovich, recognized the swing in fortunes. “(LaMarcus) and DeMar led the way. It was great to see the whole team jump in. We had a bad game last game. This is the way you react to something like that.”

Spurs: Travel to Dallas to play the Mavericks on Thursday.