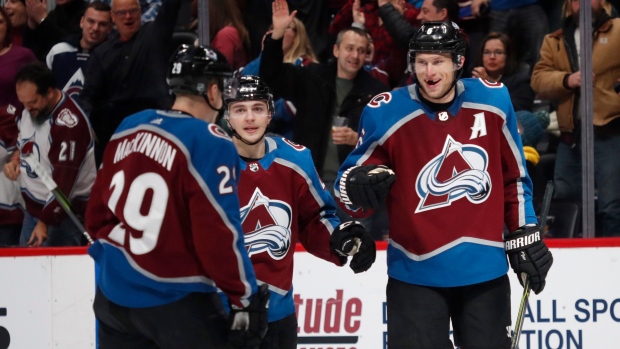 DENVER — The Colorado Avalanche have relied on their stars to carry the offence, but it was the supporting cast that got things rolling on New Year's Eve.

Gabriel Landeskog scored twice in less than two minutes in the second period, and Colorado routed the New York Islanders 6-1 on Sunday night.

Carl Soderberg and Erik Johnson had a goal and an assist each, and Matt Nieto and Patrik Nemeth also scored for Colorado, which blew open the game with four goals in the second.

The first two goals of the frame came from Soderberg and Nieto, who make up the third line along with Blake Comeau. The trio combined for 43 points entering Sunday, which matched top-line centre Nathan MacKinnon's total.

The third line had four points against the Islanders.

"Second period, I thought the Soderberg line kind of turned the tide for us," Avalanche coach Jared Bednar said. "They were fantastic. They were in on some big goals for us, getting to the net, coming up with secondary chances, banging in rebounds, real good on their puck decisions. They had a lot to do with the win tonight."

"I think training camp was real good and we set the bar pretty high, and that's kind of translated into this season," Landeskog said. "We know there's a lot of work to do still, but the first three months have been fun. I still think we have another couple of gears."

The Islanders lost the game and head coach Doug Weight, who was given a game misconduct after Landeskog's first goal.

Josh Bailey scored for New York, which has lost six straight on the road. Jaroslav Halak had 30 saves, including 19 in the second period when Colorado put a season-high 23 shots on goal. He was replaced by Thomas Greiss after two periods. Greiss stopped 12 shots.

"We had poor execution today and we didn't seem as hungry on the puck as they were. We aren't winning enough battles and that's not creating a whole lot," New York centre John Tavares said. "Obviously they came out hard and skated well. We just didn't have our best today for whatever reason and it's disappointing. Starting with myself, we have to look ourselves in the mirror and know we have a big week ahead where we have to challenge ourselves to be better."

The Avalanche took a 3-0 lead on goals by Nemeth, Nieto and Soderberg, and then blew it open at the end of the second period. Landeskog scored on the power play with 3:25 left, and after the goal Weight was venting to the officials when he was ejected.

"He just wanted to show some passion," assistant coach Luke Richardson said of Weight. "Some of the frustration, our team as a whole, we got out-battled from one end of the ice to the other, and your leader's got to show some passion. It wasn't there and Doug did that. Sometimes it's extreme, but when a game like this goes against us, you've got to be extreme."

That put Colorado back on the power play. After Scott Mayfield drew a crosschecking minor, Landeskog scored his second of the game and 16th of the season on a 5-on-3.

Bailey scored late in the third period to extend his points streak to 11 games.

NOTES: Colorado RW Sven Andrighetto left in the third period with a leg injury. ... There was a moment of silence before the national Anthem for the Douglas County (Colo.) sheriff's deputies who were shot in an ambush Sunday morning, killing one and injuring four others. Douglas County deputies had been scheduled to present the colours for the anthem but were replaced. ... Avalanche C J.T. Compher is expected to miss at least a week with an upper-body injury suffered Friday night. ... Tavares had his nine-game points streak snapped. ... The Avalanche have killed off 33 straight penalties.