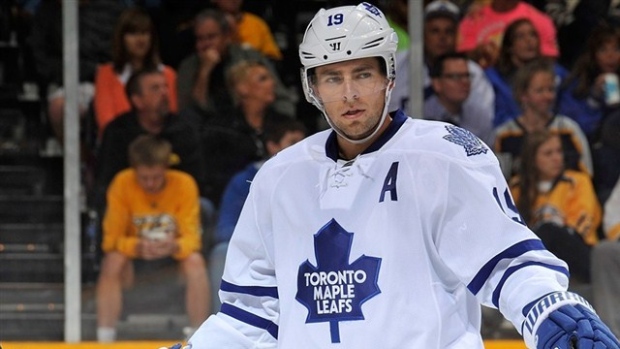 Lupul injured the hand in a fall at practice on Thursday. He will wear a cast for a minimum of 10 days before he can put a glove back on it and get some mobility back, said Carlyle, who added the winger won't go on the team's upcoming road trip.

With Lupul out, the Leafs recalled forward Sam Carrick from the American Hockey League's Marlies, and he's making his NHL debut Saturday night against the Chicago Blackhawks.

Carrick, 22, was a fifth-round pick of the Leafs in 2010 and was noticeable in the pre-season and then in seven games in the minors.

"We thought he made a strong impression at training camp and with his play with the Marlies," Carlyle said. "What we've tried to do is always make a statement that if you go down and play well, you're going to be recognized and we're going to give you the opportunity when it presents itself and we're going to bring up the best player."

Lupul's absence means the Leafs have to shift things around with their lines. Daniel Winnik, David Clarkson and Peter Holland will be counted on to pick up the slack.

Carrick slides in on the fourth line and is expected to see some penalty-killing duties while with the team.

"It's all about opportunity," Carrick said. "I think that's one of the things that I take pride in is being a hard guy to play against on the penalty kill. That's what they told me coming in here -- they thought I did a good job in pre-season at that. I just need to keep on doing it."