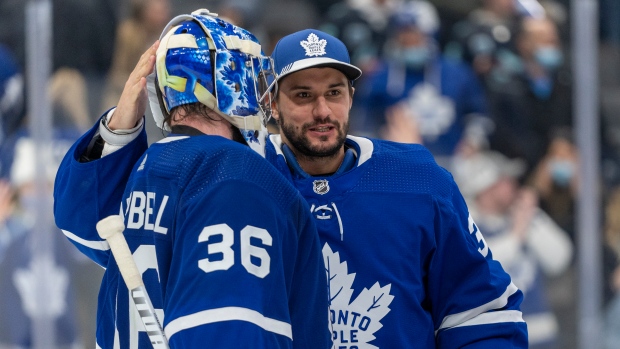 "We just didn't feel like there was anything out there for the prices paid that was going to make it worthwhile for us and make it work salary-wise," Dubas explained.

The Leafs signed 32-year-old Finn Harri Säteri on Sunday, but as a mid-season pick-up from Europe he had to go through waivers. The Arizona Coyotes claimed the Olympic gold medallist.

"It didn't work out much like a lot of the players we put on waivers," Dubas noted. "Since 2018 in the fall we've got 11 guys claimed. I think we lead the league by, like, double. It's a good advertisement for free agents to come up here, if players want to come to a place where they get lots of attention and get claimed. Probably a feather in our cap, but it hurts in moments like this."

The Leafs also inquired about reigning Vezina Trophy winner Marc-Andre Fleury, who was traded to Minnesota on Monday. TSN Hockey Insider Darren Dreger reported that the Leafs and Chicago Blackhawks discussed a deal that would've seen Fleury and Brandon Hagel come to Toronto in exchange for Mrazek, top prospect Matthew Knies and first round picks. The Leafs didn't feel comfortable dealing away so many futures.

"I'm disappointed that that conversation is public," Dubas said. "I've never had that before where the specifics like that have been made public. Frankly, it's probably [something] to ask Kyle Davidson at his availability in Chicago."

The Blackhawks general manager was indeed asked about it.

"I'm aware of his comments and that's something I'll address in private with Kyle," Davidson told reporters in Chicago.

Here’s a deal that didn’t happen. Chicago and Toronto discussed Hagel and Fleury to the Leafs for Mrazek, Matthew Knies and 1st round picks. Never reached a stage where Fleury was asked officially to waive. Toronto declined based on the futures involved…1/2

After the deadline dust settled, the Leafs have the same tandem that started the season: Jack Campbell and Mrazek.

Campbell's save percentage has cratered since the calendar flipped to 2022.

"It's not always been a straight path for Campbell," Dubas pointed out. "He's gone from being a star player at 16, 17 and with the US World Junior team to struggling at the OHL, struggling to find it as a pro, and the one thing about him is, he always finds a way to bounce back. He's a competitor and he thrives when there's doubts. He thrives when things get rocky and, for me, being a goaltender here in Toronto you have to have that quality and he has it."

Campbell has missed the last five games with a rib injury. He hit the ice for a 30-minute session with goalie coach Steve Briere before Monday's practice.

"You never want a player to get injured, but it may have come at a very positive time for him to get things stabilized and get ready to roll for the stretch run," Dubas said. "It was good to see him back on the ice the last couple of days … Looks like he's getting close so we're excited for that and excited by the way Kallgren has stepped up here in the interim. It's been a positive week on that front for us."

Kallgren, a 25-year-old import from the Swedish Hockey League, made the first three starts of his National Hockey League career last week. He beat the Dallas Stars and Carolina Hurricanes before falling to the Nashville Predators on Saturday.

Mrazek owns an ugly .884 save percentage this season and was placed on waivers on Sunday. He wasn't claimed.

"It was done for salary cap reasons," Dubas said. "I hate to do that to anybody, but you have to do what you have to do to give the team the best chance to be as flexible as possible."

Dubas signed Mrazek to a three-year deal last summer with an annual-average value of $3.8 million.

"The thing about Petr that is most impressive is, regardless of what anyone says or the way that things are going, he has a strong belief in himself," Dubas said. "It's not an arrogant way or anything like that, it's just he's been a good goalie in the league for a long time. If his confidence was starting to waver or his belief was starting to waver, I'd be really concerned ... If he had no record or a very short sample size of being a quality goalie in the league, I'd be more concerned."

Dubas pulled off a big move on Sunday by acquiring defenceman Mark Giordano from the Seattle Kraken. Why was the 38-year-old an attractive option?

"We still feel like he has a lot left to give as a player," Dubas said. "With his intelligence with the puck, his ability to move the puck up the ice, and his ability to defend, that is first and foremost. He is still a very quality player in the league. Secondly, it's just his competitiveness, the way he defends, his ability to play against good players still, play both special teams, and be versatile. All of the subjective leadership, experience, and competitiveness stuff is important, but first and foremost, we brought him in because we think he is a very good player."

The move by Dubas created some extra energy around the rink on Monday.

"For him to execute a trade of this magnitude and bring in a veteran player like Giordano, in particular, sends a message that he is serious and believes in the group," said coach Sheldon Keefe. "He is doing what he needs to do to be able to keep pace with the teams in our division. We are in a very competitive division. Each of those teams has gotten better here. We are keeping pace with that, but at the same time recognizing that additional depth on defence was an area of need."

Keefe plans to experiment with Giordano on different pairs down the stretch.

"I would imagine probably how we start won't be what we go with all the way through," the coach said.

The Leafs also acquired forward Colin Blackwell as part of the trade with Seattle.

"Blackwell is an important addition, too," stressed Keefe. "He is a very versatile guy who plays with incredible energy. Last season and this season, he scored at about a 20-goal pace. There is some offensive potential. I have liked him a lot since coaching against him in the American League when he was in Rochester."

Dubas actually tried to sign Blackwell a couple of times in free agency, but it didn't work out.

"He can play both wings, but he can also play both special teams and up and down the lineup," Dubas noted. "The thing that has really impressed me over the last number of NHL stints with the Rangers, and more so with Seattle this year, is his tenacity and how hard he plays every single game. That was the thing that jumped out, especially when they moved him on to the penalty kill this year and he showed his value there."

Blackwell has produced 17 points in 39 games this season. He scored a goal and added an assist during Seattle's loss in Toronto on March 12.

"He is not just a pure energy, run-around, forecheck, pressure kind of player," Dubas said. "He can also make a lot of plays. He showed that against us earlier in the year. He has that component that lets us move him up and down the lineup. We are really excited about him. He is not tall [5-foot-9], but he is a very strong winger with great speed and tenacity. We are excited."

Giordano and Blackwell will join the Leafs for practice on Tuesday and Keefe anticipates both will play in Wednesday's home game against the New Jersey Devils.

Left-shot defenceman Rasmus Sandin suffered a knee injury during Saturday's game in Nashville. The 22-year-old Swede was placed on injured reserve and will be out for the foreseeable future.

"It's too bad," said Dubas. "It would've been a valuable stretch run for him."

Rasmus Sandin played until late in the third period in Nashville on Saturday. Of his 19 shifts, this is the one — midway through the first — that looks like it *might* be something: pic.twitter.com/YDcbVtUPZE

Ondrej Kase did not take part in Monday's practice, but is doing well in the wake of Saturday's scary injury in Nashville. The winger, who has a history of concussions, was struck in the head by an inadvertent elbow and struggled to get off the ice.

"The only real update is that he is doing really well," said Keefe. "He is feeling good. In fact, he was trying to push to get back into the game the other night. He is feeling good. It is really positive that way. The medical team is being cautious at this stage and making sure all is good, especially for Ondrej in his situation and what he has been through as it relates to these types of injuries. Everything to this point has been positive. We will just continue to assess him and take it from there."

Jake Muzzin participated in another practice, but remains in a no-contact sweater as he works his way back from a concussion.

"He looks good to me," Keefe said. "They still have him in a red jersey so he still has some things to go through — some of the tests they do for players coming off of concussion before they get cleared for full contact in games. He hasn't gotten to that point yet. I think that is getting close from what I am told, and then they will continue to ramp him up in terms of his workload and get him ready to get back in games."

Muzzin has been out since Feb. 21. He also sustained a concussion on Jan. 15.

The Leafs did not sign any of the Marlie players on AHL-only contracts, which means they won't be available to suit up in the playoffs.

"We didn't want to use up our contract slots just to save them for the potential college players," Dubas explained.

The Leafs have 48 players under contract, which is two short of the maximum. Harvard sophomore Nick Abruzzese and Minnesota freshman Knies are potential options to join the Leafs down the stretch.

"They have bigger fish to fry than signing with us right now," Dubas said. "We just wanted to keep that option open. We don't want to put pressure on either. Neither is a senior. Both play at great programs. We want to be fully respectful of their process. We just wanted to stay flexible in case they are willing to entertain it. We didn't want to go to that part of the season — or however long that process takes for each player — and not have the ability to bring them in. We think a lot of both of them as prospects. No pressure from our end if both of them decide they are going to go back."

The Leafs held a high-intensity, hour-long practice on Monday, which ended with a battle drill.

"Those drills are great," said veteran forward Jason Spezza. "With the way the schedule is now we don't get a chance to have practices like this very often, but they're really useful. It replicates game stuff. Competitiveness between teammates is always great."

The Leafs enjoyed a day off on Sunday and don't play until Wednesday, which allowed Keefe to push the group harder than usual.

"Probably not going to have much of it the rest of the way," he said of the practice. "It was nice to see the guys taking it serious."

Things got pretty heated between a pair of Scarborough, Ont. natives in Wayne Simmonds and Michael Bunting.

"That's how they do it in Scarborough," Keefe said with a smile. "That was great."

Simmonds came over to tap Bunting on the pads after the drill wrapped.

The battle of Scarborough pic.twitter.com/fHwsCdERi4