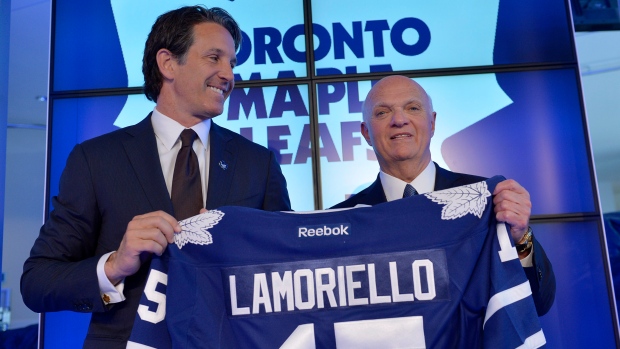 TORONTO -- As we sat down late Thursday afternoon, I chuckled and told Lou Lamoriello that about the last place I ever thought I'd be talking to him was the 15th-floor conference room of the offices of Maple Leaf Sports and Entertainment.

But here is, Mr. New Jersey Devils, now as the Toronto Maple Leafs general manager, his July hire as stunning a hockey announcement as there was this year.

Here's my conversation with Lamoriello:

LeBrun: A good place to start: What's the adjustment been like after being with the Devils for so long, the way things were there, to coming here where things are obviously different?

Lamoriello: The people have been great. From the transition end of it, I couldn't have asked for more. As far as being different, naturally things are different. When you've been accustomed to doing things a certain way for so long, it's not saying they're right or wrong, you have to take time to see exactly what and how people are doing things.

LeBrun: You are turning 73 later this month [Oct. 21]. My mother-in-law is 73 and she has a place in Florida where she enjoys her retirement. So the question is: Why? Why would you want this incredible challenge, which comes with all that pressure, at this point in your life?

Lamoriello: I think it's a great question. My family asked me the same question, from my immediate family to my brother and my sister. But I think it's my makeup, that's my personality. And also the people involved, it wasn't something that I was thinking of or looking for. ... When Brendan [Shanahan] spoke to me about it, it was intriguing. After so many conversations, it became a challenge. The most important thing is your health, how do you feel? And the last five years certainly in New Jersey have been nothing but a roller coaster because of a lot of different things. I take full responsibility, but there are a lot of things that were not on the surface that you did for the better of the organization. I thought that this would be something that I would enjoy, because I love the game. And the challenge of having success, that's what you do, you compete against yourself. Toronto, what better place? What better hockey mecca? I've always been of the opinion -- and I have to be careful how this comes out -- but I always thought Toronto should be the Yankees of the National Hockey League.

LeBrun: I read into your comment about the last five years in New Jersey as you not wanting to go out that way or be remembered for how things ended? Is that fair?

Lamoriello: I think you have to be comfortable in your own skin and you should never ... and I don't worry about what people think. You handle things and do things the way you feel is right. Now, if there are any obstacles, those are only excuses if you make them public. You have to overcome them. And I feel that's what it was [in New Jersey]. But it wasn't at times as enjoyable, even during the Stanley Cup run [in 2012, when New Jersey lost in the finals], I'm reporting to the National Hockey League that whole year [because of the financial difficulties from former Devils owners]. But you put that aside, it's in the past. All you can learn from is your experiences. And the present ownership of the Devils was great to me. I was a lifetime Devil, I didn't have to leave the position I was in. They wanted me to stay as long as I wanted and made it very comfortable. But Brendan got to me ... and I thought, Why not?

LeBrun: Sometimes change is good; people can get complacent being somewhere too long. Do you feel re-energized?

Lamoriello: I do. I don't know if I got complacent by any means ... but right now, yeah, I feel good. I think coming to Toronto, the way the fans have been, the receptiveness, I'm really looking forward to it. It's going to be interesting. I know what the obstacles are, you have to be realistic. Some people have asked about the plan being long-term, that doesn't affect me if I don't see the fruits of it immediately. It's just being a part of the process and doing things and not worrying about the end results. Do all the things that are in your control to help it get to a point. That's what motivates you.

LeBrun: You beat me to an area I was going to touch on. In all the years you've been around, I don't remember you ever using the word "rebuild" --

Lamoriello (interrupting): Well, I didn't use the word rebuild. I said that you might not get the results that you want right away. But you never look at it like teardown and buildup. I've never believed in that. Whenever people say that, I cringe in what they're saying, what that means. You rebuild a home when you take it to the bottom. You might renovate it, you might change some things. ... So I look at it, you see what the foundation is, and have the right approach of when you bring young people in that environment.

LeBrun: In bringing yourself and Mike Babcock here, it's like bringing together an all-star collaboration off the ice to guide this team. How do you think it will work?

Lamoriello: Well, I look at it this way: All three people [new coach Mike Babcock, Shanahan and himself] have nothing to prove. I'd like to think that these three people have some sort of intelligence and have experienced what winning is. So they're not going to allow anything to get in the way. You try to feed off each other. Mike energizes me. The energy he has in the morning, maybe I have to slow Mike down a little [chuckles], but we all love the game.

LeBrun: You did seemingly everything in New Jersey. You arrive here and there's a lot of other people in this front office. I doubt you've been in a front office before with this many people. What's that like?

Lamoriello: This is not a new experience for me. When I went from hockey coach at Providence College, [and then became the] athletic director. There were 24 different sports, 24 different coaches, all different administrations. ... And then when I was in New Jersey, I was told to take over the Nets by George Steinbrenner. I had to go there and have the same thing. I had to go into an organization where they already had a general manager, Rod Thorn -- a great friend today -- they all came under my umbrella. So when you go into that situation, sometimes you have to tiptoe a little bit to get the knowledge of everything. And I think that's the same thing here. You don't come in and try and make changes. You see what people do and what they can't do. Give them an opportunity. Because they might have a different way of doing things but it might get the same result. You don't want to change them. That's the process I'm in right now. And I relate back to that. This isn't new. I'm experiencing what I did at Providence College and in New Jersey.

LeBrun: What are your expectations for this team this season? Managing expectations is a big thing, especially in this market.

Lamoriello: Well, I'm of the same philosophy I had in New Jersey: you should have no expectations. You have to see where you're at. And it takes a while to see where you're at. The way I did things in New Jersey, I would know more about the team after 20 games. I would know more after 40 games. Then you decide what you are and what you do. During that period of time, you're seeing what your young players can and can't do in the minors. You're seeing if they're ready. We've all been guilty of bringing them up too soon. And yet, years ago, prior to the last two collective bargaining agreements, I was always guilty of bringing them up too late. But I've always said I'd rather bring them up too late than too soon. ... We have to make sure there's an environment for them [young players] to succeed. But more important than that, make sure they are ready to succeed, they're ready to handle certain things. You can't go on exhibition games, you're going on 60-70 percent talent out here. So you want to get them in the minors, let them feel good, let them feel secure, let them get the growth they need. Let them force you to be ready.

LeBrun: This is a much bigger hockey media market than what you were used to. Were you bemused by the attention that it garnered when word got out that you decided to have new rules for the team charter, such as no more team broadcasters allowed on board [since rescinded]?

Lamoriello: I do say, "Wow." I mean, [not allowing broadcasters on team charter] is not something that is new. It's not something that I didn't experience in New Jersey. But I understand [media reaction], it doesn't mean I get excited either way. I don't like when you hear something that maybe sometimes was interpreted a certain way. It's done for reasons. And the reason is simplistic: [The team charter] is an extension of the locker room and more so in this day and age, because of what we're trying to do, we have more people traveling, we have a sports medicine department, other things, you really want that to be private. I don't know if you have to apologize for that. ... It's all about the front of the jersey.

LeBrun: OK, a couple of goofy questions to end this. First, given how you feel about players and facial hair, have you ever had a beard?

Lamoriello (laughing): Yeah, you know, in the summer when you're on the beach. You think I like shaving every day? Who does? Come on!

LeBrun: Well, when is the last time you wore a pair of jeans?

Lamoriello (laughing): My brother bought me a pair because he wanted to see me in them. That's a true story.

LeBrun: Thanks for your time, Lou.