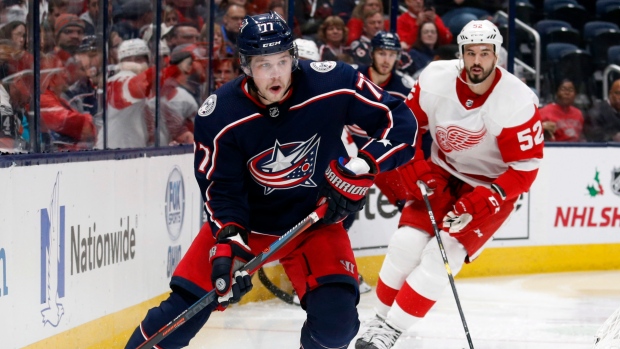 With the remainder of his season already in doubt, it's appears there's a chance Josh Anderson has played his final game with the Columbus Blue Jackets.

TSN Hockey Insider Pierre LeBrun said Thursday on Insider Trading that there's a "strong possibility" Anderson is moved this off-season. LeBrun's report came after TSN Hockey Insider Darren Dreger reported that Anderson may not play again this season due to the shoulder injury he sustained back in December.

"I think there’s a strong possibility he gets dealt," LeBrun said. "He’s an RFA on July 1, he’s a year away from UFA so any normal circumstance would be do we sign this guy long term, we don’t want to walk him to UFA. Well that’s one layer. The other layer is this. I think there’s been a difference of opinion between the team and the player’s camp about how to handle an injury that was originally announced as four-to-six weeks back in December, well now that’s two months ago.

"So I think there’s been some tension here and I foresee a trade and it’s going to be a big one. A 25-year-old power winger."

Anderson has been out since sustaining the injury in a fight with Mark Borowiecki of the Ottawa Senators on Dec. 14. He was initially given a four-to-six week timeline for recovery after the injury, but Dreger noted Thursday that Anderson may now require surgery on his shoulder which would end his season.

He posted a career-high 27 goals and 47 points in 82 games last year, but had only one goal and four points in 26 games prior to the injury this season.

Anderson is scheduled to be a restricted free agent in July after carrying a cap hit of $1.85 million this season.