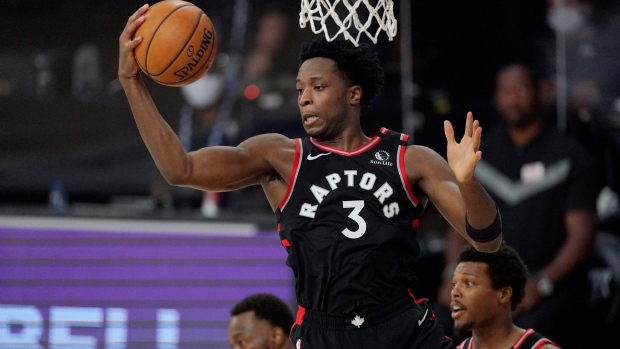 Some use their statistics and look for year-to-year improvement to indicate that they’ve taken a step forward. Others notice it when opposing teams start preparing for them differently. Certainly, awards, accolades or a big new contract can let you know you’re on the right track.

OG Anunoby has a less scientific way of evaluating his progress.

“Sometimes you just know,” the young Raptors’ forward told TSN in a recent interview. “You just know when you’re better. Even when you’re working out in the summer, you can work out five days and by Friday you could be like, ‘I’m better than where I was on Monday.’ It’s just a feeling.”

Did he have that feeling this past summer?

Most would agree. Anunoby is coming off his best season as a pro. In 43 games, the 24-year-old averaged career bests across the board – 15.9 points, 5.5 rebounds, 2.2 assists and 1.5 steals – while shooting 48 per cent from the field, hitting 40 per cent of his threes, and playing lockdown perimeter defence.

Now, as he gets set to begin his fifth NBA campaign, another seismic leap seems inevitable. This is where talent and preparation meet opportunity – the perfect storm for a player on the verge of breaking out.

“We’ve noticed it for a while,” said Fred VanVleet. “I think the biggest thing is he went from not really having moves, to getting the moves, to making the shots, to now it’s like you’re surprised when he misses, and that’s when you know you’ve turned the corner. When he gets to his spot and he misses and your surprised, that’s the sign of a good player [who’s] turned into a great player.”

Anunoby has always possessed the tools: elite defensive upside, freakish athleticism, and the combination of size and length that basketball executives dream about. Since coming into the league as the 23rd-overall pick in 2017, Anunoby has worked to refine his skills, turn perceived weakness into strength, and put those tools together, though his low-usage role hasn’t always allowed him to show it.

That’s about to change. The Raptors are ready to unleash their two-way star in the making.

“Guys who are making the ball go in like he's been doing in a variety of ways, the ball usually finds that person quite a bit,” head coach Nick Nurse said of Anunoby’s expanded role in the team’s offence this season. “I think it's always kind of been that way, that the guys [whose skills are improving have] the ability to increase their chances.”

The Raptors didn’t give Anunoby a four-year, $72 million contract extension last December – a deal that’s looking like a bargain 10 months later – just to typecast him as a glorified three-and-d player.

Kyle Lowry’s departure has left a void in Toronto offence. It’s not just the 13 shots he attempted per night, it’s also the shots he created. VanVleet and Pascal Siakam, when healthy, will absorb some of that playmaking responsibility, but the Raptors also banking on Anunoby’s continued development as an offensive creator, especially with Siakam sidelined early in the season.

And, despite his increased offensive workload, the Raptors have no intention of scaling back his defensive duties. We’ve seen it before with elite two-way players, even in Toronto. Nurse used to start games with Danny Green defending the opposition’s best perimeter player to preserve Kawhi Leonard, who would often switch onto that player late in the game, or, famously in the case of Giannis Antetokounmpo, later in the playoff series.

Although rookie Scottie Barnes and Siakam can spell Anunoby on occasion, Anunoby has always asked Nurse to be given the toughest defensive assignment. Don’t expect that to change, even if he’s expending more energy on the other end of the floor.

“Defence has always been my thing, so I take still take pride in it,” Anunoby said. “I still wanna guard, get steals, get blocks, help the team defensively. So, I’m still going to be around everywhere on defence.”

“He’s going to be guarding the best players in the league every night,” Nurse insisted. “Because he can do it.”

We got a glimpse of what a fully unleashed Anunoby could look like in the pre-season. You never want to get too carried away with anything that comes out of exhibition games, but his play was impossible to overlook.

The Raptors’ young vet seemed comfortable and confident with the ball in his hands. He was assertive. He hit step-back threes in isolation, used his strength to create separation and simply shoot over defenders in the mid-range, and showed off a tighter handle on his drives to the rim.

He didn’t just get to the line, which is something we hadn’t seen much of from him in his limited offensive role, but he knocked down 12 of his 13 attempts, a notable improvement for a 69 per cent career free throw shooter.

Anunoby appeared in four of the team’s five contests, and Nurse used them to get him as many reps as possible, even if it meant putting him in some unnatural situations. For example, we probably won’t see him post up much once the real games start this week, but the pre-season was a good opportunity to see if he could do it and get him more comfortable doing it.

They saw what they needed to see from Anunoby, and then some.

“He’s in his rhythm and his flow,” VanVleet said earlier this month. “But I kinda expected that with Pascal being out. There’s really not much sharing OG has to do. He’s our number one option right now.”

If Anunoby can carry his strong preseason into the start of the regular campaign, there will be some question as to who the team’s top offensive option should be when at full strength. Is it Anunoby? Is it Siakam? The answer is, on some nights it will be one, the next it could be the other. On some nights it’ll be both, and occasionally it might be neither, depending on who else has the hot hand. Who’s the number one option? That’s just not something the Raptors are concerned about.

“I hate that,” said Siakam. “Like, what is that? What’s a number one option? I think it’s something that’s been passed around like, ‘Oh, you can’t be a number one option on a championship team.’ How many people are number one options? How many teams have won in the last seven years with one player? We’ve got to get out of that narrative.”

“It won’t be a thing,” VanVleet said. “I think it’ll be a thing on Twitter, maybe, so people can entertain themselves for the day, but it won’t be a thing with us. We’ll be playing basketball, and I think the first option is always the right option, whoever that is at the time. We know the order inside the locker room. We respect each other and how it goes, so we’ve got that figured out.”

The reality is, the better Anunoby gets, the better it is for Siakam. Some of the best basketball Siakam has ever played was when he was next to Leonard. Granted, Anunoby is not Leonard, but great players bring out the best in other great players. There’s no reason to think that Anunoby, Siakam and VanVleet can’t coexist in Toronto’s offence.

“I’m super happy for OG,” Siakam said. “I want him to be the best player that he can be. If you see me out there, I try to help him, try to give him whatever knowledge I have that could help him get to the best level he can get to… Whoever can make the play makes the play. The more players you can have, the better it is for the team.”

Earlier this week, Anunoby appeared in ESPN’s annual column highlighting the five most intriguing players in the NBA. “I can be an All-Star, I know I can,” he told Zach Lowe.

He also has his sights set on making one of the NBA All-Defensive teams for the first time in his career. He’s had a case before but knows the voters tend to reward players in more prominent roles. Ironically, the numbers he could put up in an increased offensive role should help his chances.

With the start of a new season looming, Anunoby has set a few personal goals for himself, but he prefers to keep the specifics of those goals private. Those are just for him. But come next summer, when he looks back at the 2021-22 campaign, he’s hoping to have that feeling again.

“I just want to get better every day,” he said. “If I get better throughout the season as it goes on, or if I just feel like I’m better, then I’m happy.”​