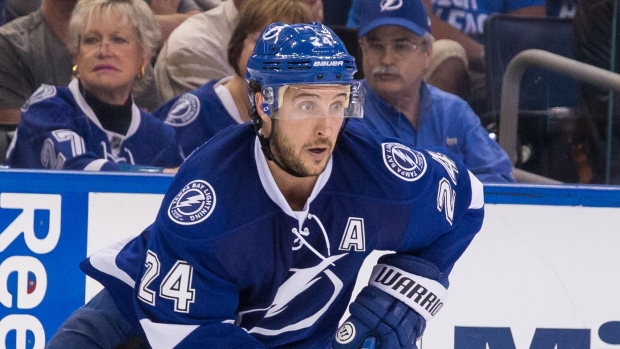 About one week ago, most of the discussion around the New York/Tampa Bay series centered around perceived struggles of forwards Rick Nash and Steven Stamkos. The usage of ‘struggling’ to describe their play seemed to be little more than ‘they aren’t scoring goals right now’. More often than not, I find that ‘struggling’ is lazy short-hand – hockey’s a wild, random game and for the most part, all you can ask is for players to create clusters of scoring chances on a regular basis. Should they do that, the goals will invariably follow.

Take Rick Nash, for example. His shooting percentage this post-season is indisputably tiny – 4.65% at 5-on-5, miles behind his career average. And yet, at even-strength in the playoffs, he still leads the Rangers in points, has individually created the most scoring chances of any player on his team, and the Rangers are getting 61% of the goals when his line is out there. If you want to isolate just for the Tampa Bay series, it’s close to the same thing: second in points, second in scoring chances, and they’re getting 57% of the goals with his line out there.

Steven Stamkos is more ridiculous. Again, for the postseason – despite early individual shooting woes (that have predictably regressed in rapid fashion of late), he’s second in points at 5-on-5 (trailing only Killorn), fourth in scoring chances (trailing all players on The Triplets line), and Tampa Bay’s scoring 62% of goals with Stamkos out there. Isolate for just the New York series, and explosion: first in points, third in scoring chances, and 62.5% of the goals. Again, that’s just at even-strength – don’t forget that Stamkos has three more points on the power-play in the first five games against the Rangers.

Ultimately, what I’m trying to say is that there are players who are struggling. But really, we need to go a lot deeper than ‘this player has a bad shooting percentage over a sample of games’ – it means something entirely different, and if the players are still positively contributing, it’s hard to indict a guy because he can’t buy a bounce or two in a series. Particularly if his underlying data (the shots, scoring chances, and goals) suggests that even with dried up points, the team is still significantly better with the player on the ice.

There are guys who qualify for the definition of ‘struggling’, of course. Ryan Callahan’s a perfect example. The 30-year-old’s $30-million contract carries with it expectations – Callahan may be paid to contribute more defensively than offensively, but truthfully, he’s doing neither.

Offensively, there’s no argument – Callahan’s been mostly a non-factor all postseason long, and that includes the New York series. Callahan is still goalless over the duration of the playoffs, and his individual scoring chance and shot numbers pale in comparison to the other well-paid forwards on the roster. He’s been out-chanced and out-shot the entire playoffs, and there’s been carryover of that into the New York series. Admittedly, Callahan returned to the Lightning lineup in short order after having his appendix removed near the end of the Montreal series, but he hasn’t been on the ice for a single Tampa Bay goal against the Rangers, yet has been on the ice for four against.

More troubling would be the shot and scoring chance data, which seem to show that it’s not just a lack of bounces for Callahan – rather, he’s just always playing in the defensive zone. I pulled the scoring chance and Corsi numbers for each Tampa Bay forward in the Rangers series, and compared them to the team averages over that same timespan.

You’ll notice Tampa Bay seems to be doing pretty well with Ryan Callahan off of the ice, less so with him on the ice: 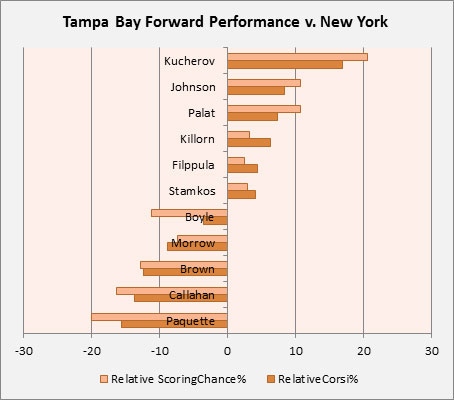 Jon Cooper, addressing this issue before game in something of a defense of Ryan Callahan, noted that some guys are paid more to slow the opposition down, to frustrate goal-scorers, and to generally create lofty offence-oriented minutes for better forwards.

"Ryan Callahan brings so much to our team in the locker room, on the ice, his physical play. Defence pairings know when he's out on the ice," Cooper said, via NHL.com "He is a pain in the butt in front of the net and he just wears his heart on his sleeve. Everybody's not going to score at the pace of Stamkos or Johnson or Kucherov or those guys who are scoring. But you need other guys to help carry the load and Callahan is one of those guys."

The only problem is, there’s not a whole lot of evidence that what Cooper’s saying right now is true. The Rangers, for their part, don’t seem particularly agitated or aggrieved when Callahan is on the ice, and that’s accurate whether you’re looking at scoring chance data, or shot data, or even goal data.

I highly doubt that Ryan Callahan was paid $30-million to simply play defence. Tampa Bay wanted him to be a dynamic two-way forward that could play in any part of the lineup, scoring goals (like the 24 he posted in the regular season) and logging minutes against the opposition’s best. But, we just haven’t seen any of that this post-season, particularly true against the Blueshirts – he’s getting caved in territorially, and he’s obviously not doing much of anything in the offensive third.

This – this is what struggling looks like. It’s multi-layered, and runs well beyond ‘a player has a poor shooting percentage in a brief window’.

The good news is some of Tampa Bay’s individual struggles this post-season haven’t hurt them. They are one game away from representing the Eastern Conference in the Stanley Cup, and that’s a major accomplishment.

I routinely note that the Lightning are probably the sharpest organization in the NHL for a number of reasons. Whether they’re public about it or not, rest assured they recognize that they will need major contributions from every player in the event they reach the Stanley Cup Final.

And that includes more from Ryan Callahan.