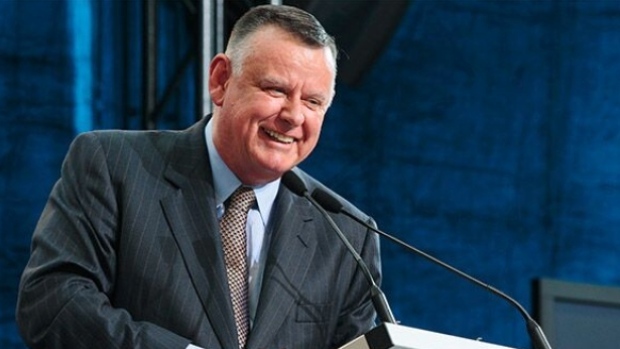 David Braley, the Hamilton businessman who owned three CFL franchises, has died. He was 79.

The B.C Lions said in a statement that Braley died in his Burlington, Ont., home Monday morning. A cause of death was not provided for the owner and chairman of the Lions.

Braley was born in Montreal but raised in Hamilton. After attending McMaster University, he began his business career with General Motors Acceptance Corporation in Hamilton before joining London Life Insurance.

Braley entered the CFL in 1987 as the owner of the Hamilton Tiger-Cats. The franchise became community owned in 1990. But the resident of Burlington, Ont., wasn't gone long, returning to football ownership in 1997 when he bought the Lions.

He also owned soccer's Vancouver 86ers and later the A-League's Vancouver Whitecaps, until 2000.

"David has been a proud and fiercely loyal owner of our team, a champion of the Canadian Football League, and a leader for whom his love of our game and our country went hand in hand and spanned decades. We share our deepest condolences with his family, friends and admirers,” Rick LeLacheur, president of the Lions, said in a statement.

“One of his final acts of devotion to Canadian football was a clear expression of his desire that the stability of our club be maintained through a smooth transition following his passing. We will work closely with David’s estate to follow that plan.”

Braley secured himself a unique position on the Canadian sports landscape in 2010 when he became the Toronto Argonauts' owner, the only person in league history to own two franchises simultaneously. That prompted media to suggest games involving the Argos and Lions were for the Braley Bowl.

Braley maintained ownership of the Argos until May 2015 when he announced the sale of the franchise to Bell and Larry Tanenbaum, the chairman of Maple Leafs Sports & Entertainment. Braley has also served as the chairman of the CFL's board of governors and as interim commissioner (March 2002 to November 2002).

But Braley's involvement in sport wasn't limited to just football.

He served as chairman of the 2003 world cycling championship in Hamilton and was a director of Ontario’s successful bid to host the 2015 Pan Am Games. He was a member of the board overseeing preparations for the Games but was forced to resign upon being appointed to the Senate in May 2010 by then-Prime Minister Stephen Harper.

However, Braley resigned his seat in November 2013 without publicly stating a reason.

He was inducted into the Canadian Football Hall of Fame in 2012 and the athletic centre at McMaster bears his name. He received the Order of Canada in 2019 for his contributions to the CFL, and for his entrepreneurial and philanthropic leadership in his community.

Braley was also a philanthropist and contributed $5 million to the athletic centre at McMaster. He has also made significant donations to the Cardiac, Vascular and Stroke Research Institute at Hamilton General Hospital, which also bears his name.

“We have lost our greatest champion. All of us associated with the Lions have personally seen, time and time again, David’s selfless commitment to our club and our fans,” LeLacheur said.

“But his example and inspiration, along with the direction he provided us all as his health failed, fuels our confidence in the Lions future. The BC Lions will continue to work hard to honour his memory by being the best we can be on the field, in the boardroom and in the community.”