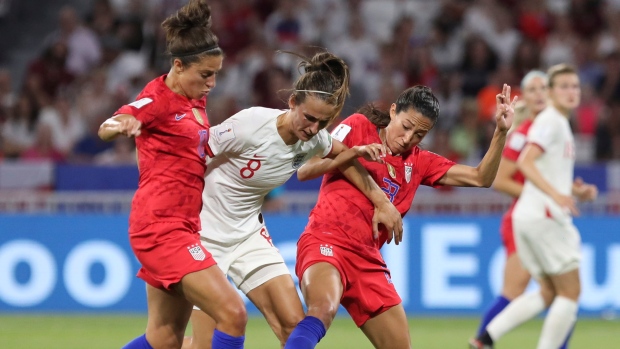 LYON, France — Carli Lloyd says the success the United States is having at the Women's World Cup in France isn't an extension of the 2015 title run.

The so-called 2019ers are their own team.

"We don't really bring up the 2015 World Cup that much because it's done, it's in the past. The focus is just on Sunday," said Lloyd, who was the breakout star in Canada four years ago.

The Americans will be vying for their second straight title and fourth overall when they face the Netherlands in the final at Stade de Lyon. More than just having its own identity, this U.S. team is different than those of the past because it has more versatility and depth, Lloyd said.

"Any player that's called upon can step into these roles and play it," she said. "Whereas I think in previous years you had kind of a core squad and some game changers that may come in and make a difference. But we've got a ton of depth on this team, which is fantastic."

The top-ranked U.S. team has already faced — and overcome — two big challenges on the way to the final. First, the Americans downed No. 4 France 2-1 in the quarterfinals in Paris and they beat No. 3 England 2-1 in the semifinals.

The Netherlands, ranked No. 8, had a far easier run on the other side of the bracket, with a 2-0 victory over No. 15 Italy in the quarterfinals and Wednesday night's 1-0 extra-time win over No. 9 Sweden.

The Dutch, who made the World Cup field for the first time in Canada, understand what they're up against.

"They have a really good team. Amazing team. So we have to be ready for the game," defender Stefanie van der Gragt said following the semifinal win. "Now we have a party. Tomorrow we talk about the USA."

Lloyd was the star four years ago in Canada with three goals in the first 16 minutes of a 5-2 final victory over Japan. She has a far different role in France, mostly coming off the bench.

She started in one match, scoring twice in a 3-0 victory over Chile in the group stage. Lloyd celebrated with a golf clap, answering the critics who blasted the U.S. team for enthusiastically celebrating every goal in the 13-0 rout of Thailand in the tournament opener.

The Americans have drawn attention for their celebrations throughout France, including Megan Rapinoe's "Are You Not Entertained?" pose against France and Alex Morgan's tea sipping versus England. As a result, the players have been branded as brash and even arrogant.

Lloyd brushes the criticism aside.

"I think everybody's just kind of having fun with the celebrations and embracing the moment," she said.

Lloyd, who turns 37 next month, is the oldest player on the team and has 280 national team appearances with 113 goals. This is her fourth World Cup.

In addition to her hat trick in Canada, Lloyd scored both goals in the gold-medal match against Japan in the 2012 Olympics. She became the only player to score winning goals in consecutive Olympic finals: At the Beijing Games in 2008, she scored in overtime for a 1-0 victory against Brazil.

In France she's playing off the bench as more of a "super sub" to intimidate opponents and provide fresh legs. Lloyd has been blunt from the beginning that she's not pleased with the new role. She still feels like she could start and be a difference-maker.

"There's a lot of things that are out of your control in life and you can either look at it as a negative or you can look at it as a positive," she said. "I know that my ability, my work ethic, and many things that I bring to the team, the intangibles — I can be playing out there, no doubt. But for whatever reason, coaches have made that decision and I come in and it's my job to make something happen."

"New journey, different journey," she said. "We've just got to go after it."