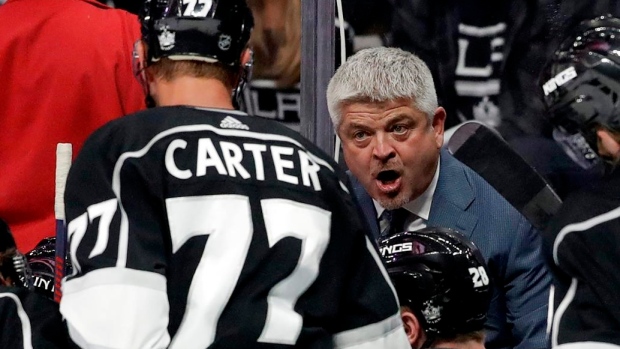 The Los Angeles Kings appear to be entering the next stage of their rebuild, focusing on developing the group rather than continuing to make major changes to their roster.

Kings head coach Todd McLellan told the Los Angeles Times that he believes that should be music to the ears of veterans Anze Kopitar, Dustin Brown, Jeff Carter, Drew Doughty and Jonathan Quick.

"The players that are coming back this year, they’re long-term players for us," McLellan said. "I heard [general manager] Rob Blake talk to each of the individuals saying, ‘Listen, we are basically done with the initial phase of the rebuilding.’ We’ve moved players around and out and brought different players in. It’s time to turn the ship and let’s start growing all of this.

“If I’m one of the five long-term veterans coming back, I got to be excited to hear that. I’ve got to be excited about seeing [Blake] bring guys like Olli Maatta in and trading for Lias Andersson. That’s signalling that we’re trying to make our team better and trying to push now up the hill rather than just waiting, not necessarily to bottom out, that’s a bad term, but for the cleanse to finish. I think there’s more stability. But with that comes some responsibility now of turning the ship the right way and moving forward.”

McLellan is entering his second season as head coach of the Kings after guiding the team to a 29-35-6 record last season before play was halted due to the COVID-19 pandemic. The Kings were not among the 24 teams included in the NHL's Return to Play, missing the postseason for the second straight year.

The Kings were quiet in free agency this fall, re-signing only their restricted free agents. The team did, however, add Andersson and Maatta via trades in October and selected Quinton Byfield with the second pick in the 2020 NHL Draft.

"The additions of Byfield and Lias Andersson to the prospect pool, that's pretty exciting," McLellan said. "And then with that being said, there's a number of young prospects that are a year older, a year stronger, a year hungrier that are going to push as well.

"That's signalling that we're trying to make our team better and trying to push now up the hill rather than just waiting. Do we want to move forward and grow the program and push the team forward and push up the standings? Of course we do."

The Kings have not won a playoff series since winning the Stanley Cup in 2014 under then-head coach Darryl Sutter.

While the NHL re-alignment for the 2020-21 season has yet to be finalized, TSN Hockey Insider Pierre LeBrun reported last week the Kings could find themselves in a division with the Anaheim Ducks, Arizona Coyotes, Colorado Avalanche, Dallas Stars, San Jose Sharks, St. Louis Blues and Vegas Golden Knights.