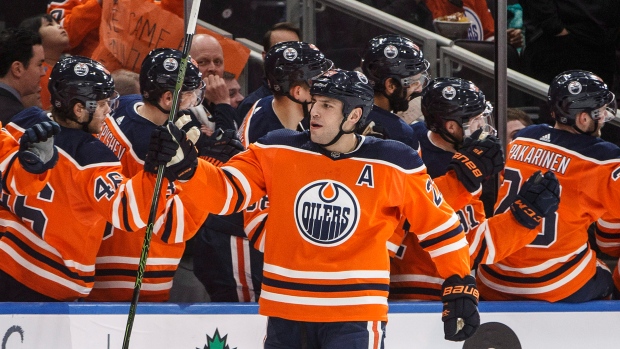 Milan Lucic found the back of the net Monday night for the first time in more than two months.

The Edmonton Oilers forward scored in the first period of Monday's 4-3 overtime win over the Arizona Coyotes to snap his goalless drought at 29 games.

Lucic beat goaltender Darcy Kuemper with a slapshot from just above the faceoff dot in the offensive zone to put the Oilers up 2-1 13 minutes into the game. Ending a drought that dated back to Dec. 23, 2017.

“I think it was pretty evident how frustrated I was,” Lucic told the Edmonton Sun after Monday's win. “Slamming doors a bunch of times, breaking sticks, you name it. It was a tough stretch, that’s for sure. It was a really rough time to go through. Stretches like that, when you come out of them, sometimes it can make you better. You hope that happens moving forward.”

Defenceman Oscar Klefbom scored the overtime winner on Monday, snapping a goal drought of his own at 33 games. Klefbom, though, remarked after the game he was relieved to see Lucic end his drought.

“I felt so good for Milan when I saw the puck go in,” said Klefbom. “There was a lot of frustration for him. I don’t know how many times he hit the post. He’s been so close. I was relieved when he scored.”

With the Oilers 17 points back of a playoff spot, head coach Todd McLellan said the team is simply looking to take small positives from their remaining 16 games.

“So, to get that off their back and shoulders is huge. And the good sign for our team is we’re not where we want to be but they all reacted positively to that. They’re pulling for teammates, they’re happy for them and you look for little team signs like that.”

Lucic has topped the 20 goal mark in three of the past four seasons, but with 10 goals through 66 games he'll be hard pressed to reach the mark again this season. His shooting percentage on the season sits at career-low eight per cent.