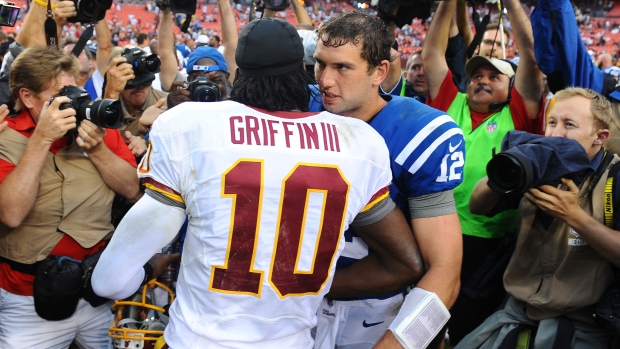 Fourteen years after taking Peyton Manning over Ryan Leaf atop the NFL Draft, the Indianapolis Colts made a similarly brilliant call in the 2012 NFL Draft, taking Andrew Luck over Robert Griffin III. As Luck continues to look more and more like Manning, Griffin so too is looking more like Leaf.

The Washington Redskins announced Monday Kirk Cousins would start the year as the team’s starter, effectively ending the RG3 era in Washington and perhaps the Baylor product’s time as a starter in the NFL.

To be fair, Griffin excelled his rookie season and has never been the same since his devastating knee injury in the 2012 postseason. But reports of Griffin’s leadership and agreeability in the locker room cast serious doubt on whether he’d ever be a star in this league.

Off the board third overall that year was Trent Richardson, who on the same day Griffin lost his starting gig in Washington, was jettisoned from his third team. The Oakland Raiders reportedly released Richardson Monday in the first wave of cuts after he failed to distinguish himself in his tryout with the 32nd ranked rushing offence from a year ago.

Through three years Richardson has 2.032 rushing yards (a 3.3 yards per carry average) and is better known for his blunders than his highlights.

As an aside, while the Colts deserve praise for picking Luck over any of the busts atop the 2012 Draft, they did trade a first round pick for Richardson a year later, after the Cleveland Browns had determined the former Alabama star wasn’t NFL material.

The Minnesota Vikings selected offensive tackle Matt Kalil fourth overall that year and after showing some initial promise in his rookie year and being named to the Pro Bowl, the USC product’s production has slipped the past two years according to profootballfocus.com, including a very disappointing 2014.

And rounding out the Top 5 is the biggest bust of them all, receiver Justin Blackmon. If Blackmon could stay out of trouble and on the field, he’d likely only trail Luck in productivity. The 25-year-old had 1,280 receiving yards in his first 20 games but has been suspended indefinitely for substance abuse issues and Jaguars GM recently said he doesn’t expect Blackmon to ever return to football.

The draft wasn’t a total crapshoot after Luck however. Notable names like Luke Kuechly, Dontari Poe, and Ryan Tannehill – who the Miami Dolphins didn’t mortgage the future to the St. Louis Rams to acquire – were all selected in the first half of the first round.