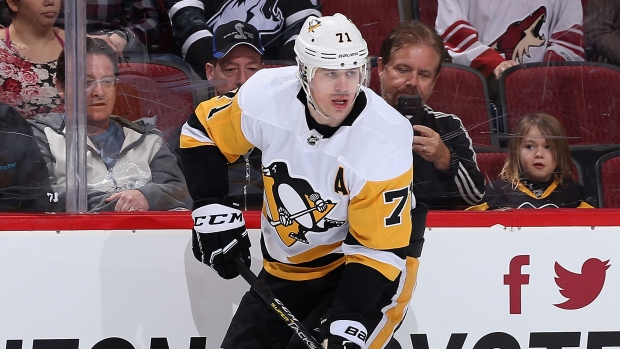 Pittsburgh Penguins forward Evgeni Malkin has been suspended one game for high-sticking on Philadelphia's Michael Raffl.

Pittsburgh’s Evgeni Malkin has been suspended for one game for High-sticking Philadelphia’s Michael Raffl. https://t.co/ECTGHHVwIC

The incident happened on Monday night with 4:54 left in the third period and resulted in Malkin being assessed a match penalty. Malkin reacted to a punch to the back of the head from Raffl by swinging his stick one-handed at the head of the Flyers forward.

He told Josh Yohe of The Athletic after the game that he did not expect to be suspended for the incident.

Malkin admitted in a scrum after the game that it was a dirty play on his part, but accused Raffl of diving to draw a penalty.

“I’m not trying to hit his face… I know it's dirty, but I missed, my stick (did) not touch his helmet or shoulder” Malkin said. "He just like dived and the referee give me five minutes. Nothing like dangerous, (he's) not bleeding, nothing. I know I gave them a five-minute power play, but it's my fault for sure. Play smart next time.”

Malkin added that Raffl "played dirty" in the lead up to the incident.

Penguins head coach Mike Sullivan said he was surprised to see the centre ejected since Raffl was unharmed on the play.

“I just think on Geno’s part it was reactionary. He was getting punched in the back of the head. It was a battle between the two of them and I think it was reactionary,” Sullivan said. “I was a little surprised it was a match because the player didn’t get hurt on it or there wasn’t real significant contact. But that’s now how the referee saw it.”

The Penguins beat the Flyers 4-1 with Malkin picking up an assist in the game. He has 14 goals and 42 assists in 51 games this season.