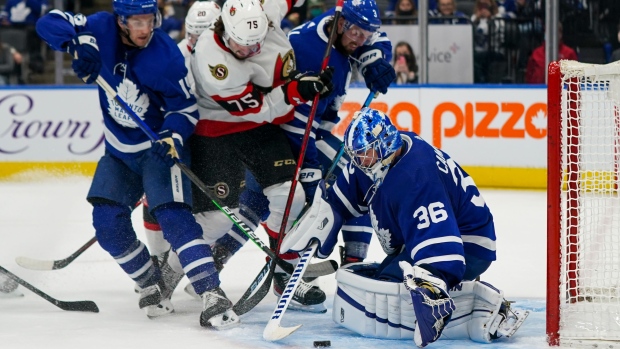 Jack Campbell has stopped 41 of 42 shots through four periods of action this season.

"He looks great," said forward Alex Kerfoot. "He looks like he's out here to prove he can do it for a full 82 games. We have a lot of confidence in him."

Campbell has never made more than 26 starts in an NHL year, but adapted well to a heavier workload last season when Frederik Andersen was sidelined with a knee injury. Campbell finished with a 17-3-2 record and .921 save percentage.

"He hasn't changed anything," observed coach Sheldon Keefe. "The expectations have grown a little bit. For the first time he's the No. 1 guy to start the first game of season, all those kind of things. As your role evolves sometimes players can get caught up  in that and they change who they are and what they do. He's remained consistent in his habits, his preparation, his personality, all of those things have just been the same."

Campbell stopped all 10 shots faced in the third period on Thursday in Ottawa. He was forced into the game after Petr Mrazek sustained a groin injury.

"He's not available today," said Keefe. "He's still being assessed in terms of just how long he's going to be out. At this point, it's not looking like it's going to be long term in the sense of LTIR and that kind of stuff. They're just going through that process, but they haven't fully assessed him here yet."

If Mrazek was placed on long term injured reserve that would mean he would be unavailable for at least 24 days and 10 games.

Mrazek was slow to get up after a great save at the buzzer #LeafsForever pic.twitter.com/StDq0YZtT5

Asked if his mindset changes with Mrazek out, Campbell offered a one-word answer on Thursday night.

Justin Holl will not play on Saturday due to illness. Keefe said the defenceman was dealing with "cold symptoms" and the team was still awaiting the results of his polymerase chain reaction (PCR) COVID test.

"He's a skilled guy," said defenceman T.J. Brodie. "His composure with the puck is something I've noticed and the plays he can make under pressure. He's one of those guys who can see the first pass easy."

Liljegren, a righty, will take Holl's spot on the right side of the second pairing with Jake Muzzin. Travis Dermott, a lefty playing the right side, will remain on the third pair with Rasmus Sandin.

"Just for familiarity," Keefe explained. "Just not trying to disrupt too many things. Lily, obviously, spent a great deal of time with Muzz in camp and we liked those guys together so that's what we'll go with to start tonight."

Liljegren skated with Muzzin during the first week of training camp.

Auston Matthews (left wrist) did a skills session on Saturday morning and also joined the team for the main skate. It remains unclear when he'll be available to return to the lineup.

"He's feeling good and he's progressing," said Keefe. "In terms of his schedule and all that, there's no set date here. It's just a matter of him continuing to progress. But, I know when I talked to him today it was very positive. It's been positive throughout, but even more so. So, I would say it's progressing well."

The Leafs host the New York Rangers on Monday and the San Jose Sharks on Friday before travelling to Pittsburgh for a game next Saturday.

With Mrazek, Matthews and Holl all sidelined on Saturday, but not on LTIR, the cap-strapped Leafs don't have enough space to recall a goaltender. As a result, Alex Bishop, a 24-year-old from Richmond Hill, Ont., has been signed to an amateur tryout and will dress as the back-up goalie.

"To be honest, I haven't even spoken to him yet," Kerfoot said with a smile. "I just saw him on the ice. I didn't score any on him so he looked pretty good."

Bishop currently plays at the University of Toronto where he's a commerce major. He hasn't played for the Varsity Blues since the pandemic began, but has three years of Quebec Major Junior Hockey League experience under his belt (2014-17).

That’s our very own Alex Bishop at @MapleLeafs morning skate! Tune in tonight! 🎉🎉🎉

"The flat cap has created some situations here that are a lot more difficult to manage even then they were a year ago when they had the taxi squad and a third goalie and all that kind of stuff," Keefe said.

The Leafs will be able to recall Michael Hutchinson on an emergency basis once they get through Saturday's game.

Kerfoot was among Toronto's stand-out players in the series against Montreal in May. He produced a goal and five assists while playing alongside William Nylander.

Through two games this season, though, Kerfoot hasn't registered a point or even a shot on net.

"We can do better," Kerfoot said of his line which includes Nylander and Michael Bunting. "We got to play more in the offensive zone, kind of get more stuff going to the net. We haven't really generated a ton offensively. We're looking to do that more tonight."

Bunting picked up a power-play assist on Wednesday and has drawn a penalty in both games so far.

"He's just one of those guys who plays a really competitive game and he's hard on pucks, hard around the net," said Kerfoot. "He's always around the net so guys are always trying to move him out of their way and he doesn't like that so then he kind of gets into it with guys. He's a great guy to have on your line and a great guy to have on your team. He ends up drawing a lot of penalties for the group."

Nylander scored Toronto's only even-strength goal so far, assisted by Mitch Marner during a line change on Wednesday, and looks like he's picking up where he left off last season.

So, when Keefe was asked about the Kerfoot line this morning, the coach focused his answer on the centre.

"He hasn't played, to me, to the level that he had in the playoffs," Keefe said. "He and Willy together on that line, when John [Tavares] went down, they were tremendous for us and they had great chemistry. Specific to Alex, he played with lots of confidence. He wanted the puck. He was looking to make plays. He was flying through the neutral zone. We haven't seen that here quite yet so it's about him finding his groove and finding his confidence and getting back to doing that. I want him to clear his head and get back to being the player he can be."

Newcomer Nick Ritchie is also still looking to get going. Keefe pulled the left winger from Orangeville, Ont. aside at the end of Saturday's skate.

"He's got to focus on doing the things he can do in terms of using his physicality, getting on the puck and forechecking," Keefe said. "There were some things defensively that we didn't like the other night that we spoke to him and the team about this morning."

"He played really well in the pre-season and that gave us some confidence," Keefe said. "It hasn't gone as well in these first couple, but we got good confidence that he'll bounce back from that and find his way here. I had a really good talk with him this morning. He's confident and knows where he's got to get better."

Next up: Nick Ritchie pic.twitter.com/eO9PP4hmqd

The Leafs were fuming about a few controversial calls during Thursday's loss to the Senators. Tavares was whistled for hooking in the final minute, which put the comeback quest on ice.

Tavares gets penalized with a back-breaking hooking call #LeafsForever pic.twitter.com/Gc1QHhuKiz

"We have seen the memos on the [crackdown on] cross-checks and the guys are well aware of that," Keefe said in Ottawa. "They are adjusting to that, but I haven't seen the memos on not being able to lift guys' sticks. That is new. I don't think that is going to be the standard going forward, but it is early in the season for everybody."

And while there was a lot of angst on Thursday, Jason Spezza believes the Leafs have taken some important steps in the referee relations department.

The Leafs are doing a better job handling the fallout from questionable calls.

"It's working with them after," Spezza explained. "In the heat of the battle, we're all guilty of yelling and sometimes the refs yell back and it's part of the game. It's actually a great part of the ref-player relationship that goes on in hockey, but then you work with them after, you talk to them. They're good guys who are trying to do their job."