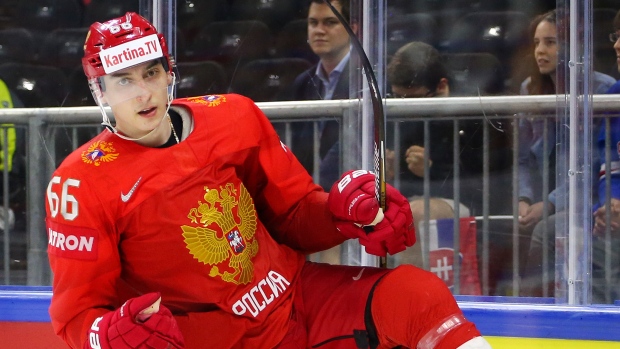 Mikheyev’s services had been in high demand around the NHL, despite the fact he was never drafted. TSN Hockey Insider Darren Dreger reported last week that a majority of the NHL’s 31 teams had shown interest in Mikheyev, and the forward then confirmed to Russia’s OM1 this week that the Leafs and Vegas Golden Knights were pursuing him closely.

Throughout his KHL tenure, Mikheyev has put up almost an equal number of goals and assists, indicative of his playmaking ability and shooter’s mentality. Mikheyev also has experience killing penalties.

If Mikheyev does come to North America next season and make Toronto’s roster, the 6-foot-2, 194-pound winger would be among the Leafs’ biggest forwards at that position.

According to Dreger, the Leafs have been working on signing Mikheyev for some time, which would explain why the deal has come together less than a week after general manager Kyle Dubas said at the team’s locker clean out day that the Leafs wouldn’t be signing anyone until pending restricted free agent Mitch Marner’s contract was finished.

“Without an answer on Mitch, we’re going to be in a stalemate,” Dubas said last Thursday. “It is a top priority because we’re not going to jump around and chew up our cap space we are going to need for Mitch by or with fringe signings either.”

The Leafs currently have six wingers under contract for next season who played for the club this year (William Nylander, Patrick Marleau, Connor Brown, Zach Hyman, Trevor Moore and Nic Petan), with Marner, Kasperi Kapanen and Andreas Johnsson are all pending RFAs waiting on new deals. Tyler Ennis will be an unrestricted free agent on July 1.