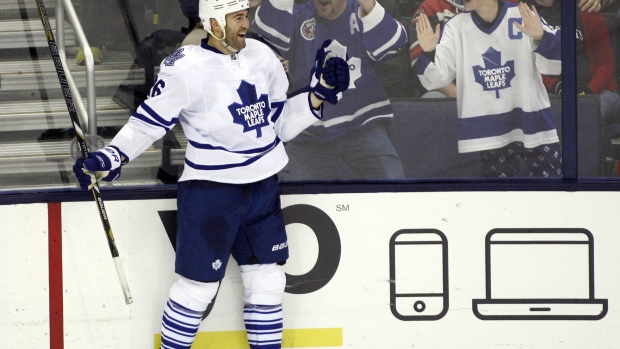 We commonly hear this advice in the financial markets with regards to generating profit. In a vacuum, the idea is easy enough: you buy stocks when the price has bottomed out, and you sell them when the price has hit a theoretical ceiling. Easy game!

Well, not so much. See, it’s extremely difficult to predict the flow of financial markets, and only a very few skilled traders have a knack for identifying the stocks that have buy-low, sell-high potential.

This concept is replicated in basically any industry where assets are exchanged in a free market, including the National Hockey League. Every general manager is scouring free agency and the trade block looking for the undervalued, ready-to-rebound player whose real value far exceeds his perceived value. The tricky part is finding these players, knowing when to get in, and knowing when to get out.

One of the better examples of this concept being executed last season was by the Toronto Maple Leafs, who added the ultra-reliable Daniel Winnik at an absurdly low cost of $1.3-million for one season. Winnik did not have the lofty counting numbers that generate big free agency contracts, but his underlying numbers were fantastic. The bet was that Winnik’s possession metrics and generally sound defensive play told a better story of his value than his 49 points in the prior two years with Anaheim, and that turned out to be the case. Winnik scored 25 points in 58 games (the Leafs outscoring the opposition 29-16 at 5-on-5 with him on the ice), and was immediately flipped in a trade to playoff contender Pittsburgh for a pair of valuable 2016 draft picks.

Oh, and Daniel Winnik – who was on an expiring contract – ended up re-signing in Toronto on another reasonable two-year, $2.25-million AAV contract.

To recap: the Leafs signed a good player at a cheap cost, traded him for draft picks to acquire more talent down the road, then re-signed the player as soon as he hit free agency.

This is true business acumen. The Leafs strategy with Winnik was rather clear the minute they signed him in the summer of 2014. And, though him bouncing back wasn’t a guarantee, the probability of it occurring was more favourable than not.

It did not, of course, go unnoticed that the Leafs signed two more forwards to one-year contracts this summer, including former Vancouver forward Shawn Matthias, and former Montreal forward P.A. Parenteau.

Matthias is an interesting candidate, since I didn’t expect a team would be able to buy him low after a rather productive 18-goal season. But, there’s the other side of that coin: teams can pre-date his 2014-2015 campaign and see less productive seasons (six goals in 2010-2011; 10 goals in 2011-2012; 14 goals in 2012-2013; and 12 goals in 2013-2014) by raw scoring analysis. So, maybe the market was understandably a bit cooler on him than I originally anticipated. It matters not: if Matthias is simply able to replicate his scoring from one year ago, the Leafs should have a reasonable asset to flip for future assets at the trade deadline.

The market being cool on P.A. Parenteau was totally expected. He had a roller-coaster season in Montreal filled with healthy scratches, and the coaching staff never seemed to trust him despite impressive prior seasons in New York and Colorado.

It’s hard to reconcile Parenteau’s frequent omission from the lineup with his on-ice performance – in basically every spot over the last five years, his teams have been considerably better with him on the ice versus off of the ice. It’s not unlike the Daniel Winnik story, in which the Leafs rightly identified an undervalued contributor just before his stock predictably rose.

Here are Parenteau’s 5-on-5 numbers over the last five years: 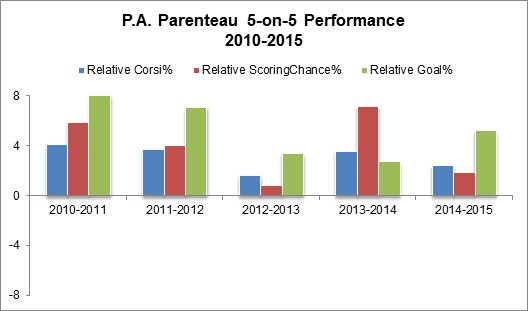 Yes, you are reading this accurately, but I’ll recap for the sake of clarity. P.A. Parenteau has been only a positive impact on his respective team’s performance from a goal-scoring perspective, a possession perspective, and a scoring chance perspective. By no metric has his team performed relatively worse with him on the ice. So yes, it’s just a bit confusing to understand where Parenteau has ever adversely affected his team. The numbers don’t back up that argument.

It’s worth mentioning that this type of player doesn’t really grow on trees – the number of players who have considerable year-after-year impact is relatively small, comprised mostly of first and second-line talent that are paid mega-bucks.

Toronto’s bet, then, is a reasonable one. They’re saying that it’s quite difficult to string together this type of performance without being a pretty talented player. The market, however, suggests that Parenteau’s closer to being punted from the league than inking another multi-year contract.

Like the financial markets, there are very few guarantees in the sport of hockey. Savvy executives recognize that they’re dealing with probabilities and not absolutes, and are simply banking on a decent portion of their bets to pan out.

The Leafs already connected on Winnik Contract I. Up next are Matthias Contract I and Parenteau Contract I. I feel rather confident that at least one of those two players will exceed contractual expectations and net something for this rebuilding team at the deadline. Should both play well, the Leafs – to very little risk of their own – connect on three of three sensible gambles, and could end up acquiring five or six ‘additional’ draft picks.

That’s how to expedite a rebuild.