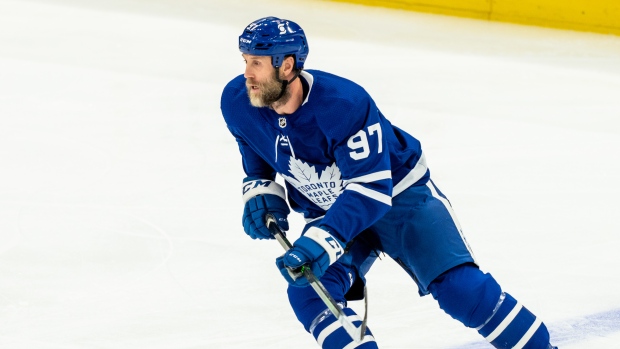 TSN Toronto Reporter Mark Masters reports on the Maple Leafs, who practised at Ford Performance Centre on Monday ahead of Wednesday’s game against the Canadiens in Montreal.

"It's horrible," the Leafs forward said with a laugh. "It's itchy. It's uncomfortable. I look at myself in the mirror and I'm like, 'Ugh, it doesn't look good.'"

So, why is the Harvard product all in on facial hair this season? Is it because, perhaps, of bearded big man Joe Thornton, a reporter wondered.

"It sure is," Kerfoot confirmed. "I figured, middle of the pandemic, with Jumbo on the team, there's no better time to kind of let it go. I've had it going for a little bit and going to keep it going for the rest of the year. But, I don't think I'm ever going back to it."

It says a lot about Thornton's presence and personality that he can inspire a teammate to alter his appearance. And the 41-year-old future Hall of Famer is also doing his part to help change the way the Leafs look on the ice.

With the regular season winding down, Thornton has thrown his 6-foot-4, 220-pound frame around the ice much more. Among the Leafs, only Wayne Simmonds (19) and Jake Muzzin (20) have more hits than Thornton (18) over the last seven games.

"He's bringing some fire," said Muzzin. "He's leading the way. It's beautiful. It's contagious throughout the room when the oldest guy on the team is doing that every night. So, guys are following and it's paying off for us."

Thornton got into it with Jets winger Nikolaj Ehlers in the third period on Saturday leading to coincidental minors late in the game and a rather one-sided conversation between the players once they were seated in their respective penalty boxes. Thornton, unsurprisingly, did most of the talking.

"He's had a lot of emotion the last few games," noted Kerfoot. "The bench has really fed off that. He's always like that in the locker room, but to see him out there on the ice get animated, get into it with guys ... when you see a guy like that going and doing those things it spurs the group on to push a little extra as well."

The extra emotion has also ignited some offence for Thornton, who snapped a 17-game point drought with an assist on Thursday and then ended a 27-game goal drought on Saturday.

Last week, Thornton explained that he's become more comfortable with his role on the team. After starting the season on the top line and top power-play unit, Thornton is now lining up on the fourth line and second power-play unit.

"There's a switch that has flipped a little bit here for Joe in the last few weeks," Sheldon Keefe said following Saturday's win in Winnipeg. "He's bringing more fire competitively on the ice, more fire in the dressing room, more fire on the bench."

The Leafs coach pointed out that this is an important signal to the entire group that it's time to ramp things up.

"We have a couple guys leading the way," said defenceman Justin Holl, listing Thornton and Simmonds. "You love to see that kind of energy and it fires everyone up. The games in Winnipeg kind of felt like playoff hockey ... there was some bad blood and a lot of physicality."

But it's not enough.

Even after some off-season additions, the Leafs still aren't the most physical team. Toronto ranks 28th in hits per 60 minutes (17.23), which is up only slightly from last season when they finished 29th (16.72). Keefe said the specific physicality he's looking for is in puck battles, creating space and defending hard.

"We've definitely made progress throughout the season," said Muzzin, who leads the team in hits. "It's still an area we can continue to get better at. The last two games I thought we did a good job being physical and being harder on guys and it's tough to play against when a team is consistently doing that. We got to continue focusing on that."

There was a huge hit at Monday's practice as linemates Nick Foligno and Auston Matthews collided in the neutral zone during a drill. The contact broke Foligno's stick and sent the 33-year-old flying. Foligno popped up all smiles and raised a broken piece of the stick in his hand as teammates offered taps.

While he got the worse of Monday's hit, Foligno's physical play has been a welcome addition along with his responsible defensive-zone presence.

"He's very smart," observed Muzzin. "[He's] in position, you know, [and] goes through the man. He's on the right side of the puck. Just an efficient player. It’s nice to see. Came right in seamless with the top guys there and contributed and helped out defensively so nice to have him for sure."

The Leafs penalty kill ranks 26th this season, but killed off all five Jets power plays with Foligno in the fold.

"He's been great," said Holl. "On the penalty kill he's been very effective. Really good at the end of the game on the six on five. Works hard. He's got two points in two games so he's doing it all right now, which is really exciting to see.​"

Foligno was on the ice with Matthews and Mitch Marner late in Thursday's game when the Jets had an extra attacker on.

The Leafs did some five-on-six work on Monday with the top line joining Muzzin and Holl. The second group featured John Tavares with Ilya Mikheyev and Kerfoot and the defence pair of T.J. Brodie and Morgan Rielly.

Jack Campbell has performed well this season posting a 13-2-1 record and .922 save percentage, but he's never played in the NHL playoffs and is still adjusting to the heavier workload in Frederik Andersen's absence.

After winning on Thursday, Campbell admitted he's been too hard on himself following losses and is aiming to do a better job handling the emotional rollercoaster that is the NHL season.

"Everybody has helped him with that," said Keefe. "I had a conversation with him after I pulled him against Calgary. I wanted to talk to him before he left the building and talk to him about that. It's part of playing every day. It's a credit to him for taking responsibility and ownership and stepping up and taking some heat, but it's unnecessary.

“There's times he's taken it and he doesn't deserve it. I mean, he's played excellent and had played excellent for us and didn't deserve that so it was just giving him permission to be even keel and ride that wave a little bit better ... Really, it's just part of the maturation process as he's growing into a new role here."

With Zach Bogosian sidelined until at least May 18 with a shoulder injury, lefty Travis Dermott has shifted to the right side on the third defence pair.

"I haven't seen any issues there, any hiccups," said Keefe. "He's shown the ability to do that in past. He looks comfortable there. He's going to have to continue to get comfortable in that spot and get comfortable getting regular reps on the penalty kill. His minutes rising … that's a continued adjustment for him, but one he's taken on throughout his time in the NHL and we expect him to be able to do that. The early indications are he'll be ready."