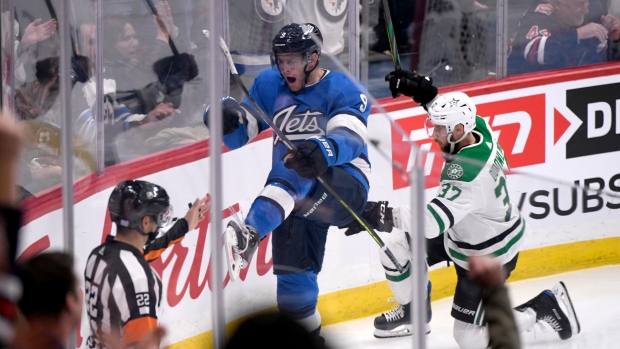 WINNIPEG — Mark Scheifele decided the best move was for him to shoot the puck instead of passing it.

He made the right choice.

The veteran centre scored 21 seconds into overtime as the Winnipeg Jets ended the Dallas Stars' winning streak at four games with a 3-2 victory on Sunday.

Scheifele got his seventh goal of the season when he went in on a 2-on-1 with Kyle Connor, and kept the puck before beating Anton Khudobin with a low shot.

“At first I thought (Stars defenceman Miro) Heiskanen was going to come over a little more and I was going to go into the triangle to (Connor), but he kinda backed off a little bit and I thought I’d just shoot it,” Scheifele said.

Patrik Laine snapped a 10-game scoring drought with a power-play goal and Andrew Copp also scored at even strength for the Jets (10-7-1).

Connor Hellebuyck made 26 saves for Winnipeg, which has points in its past five games (4-0-1).

Mattias Janmark and Radek Faksa scored for the Stars (8-8-2), who were beginning a four-game road trip.

Khudobin stopped 26 shots for Dallas in his seventh game of the season.

"With our system we're going to get chances,” said Stars forward Jamie Benn. “You know we haven't been successful just because we've been lucky as of late.

“We believe in what we're doing and we've just gotta stick with that."

Benn is on a 13-game scoring drought, tying his own career low mark.

"They have to decide who's going to be a difference-maker,” Montgomery said. “I mean, look who scored for the Jets.

“We got really good, big goals from Janmark and Faksa and that's our third and fourth line.”

Winnipeg led 1-0 after the first period following a slow start.

The Jets didn't get their first shot on goal until five and a half minutes into the opening frame, and then had a quick second and third shot with just over five minutes remaining.

Their goal came with Benn in the penalty box for interference.

Laine rifled a one-timer high over Khudobin's left shoulder with 27 seconds left in the period, his fourth goal of the season and first since Oct. 10.

Winnipeg outshot the visitors 7-5 in the first, but Dallas swung the shot advantage to 17-13 in its favour after two periods, including a pair of goals.

Janmark tied the game at 5:22 of the second when he beat Hellebuyck on the glove side, followed by Faksa tipping in a point shot by Esa Lindell at 10:27. Faksa has three goals and one assist in a three-game point streak.

Copp quickly tied the game 2-2 at 1:52 of the third period off a rebound of a Tucker Poolman shoot. Copp stretched his point streak to three games, with two goals and an assist in that span.

“I think we’ve proved to ourselves that we can come back in any game this year,” Copp said. “Any game where we’re down a goal or two goals, it doesn’t really matter how much time is left. We have the confidence we can do it. We’ve done it before.

“I don’t think there’s any real panic in our room when we get down a goal. We know the firepower that we have.”

The Jets are 5-5-0 when trailing after the second period this season.

Winnipeg was gifted a power play late in the third when Khudobin went out of his net to beat Jets forward Jack Roslovic to the puck, but he ended up banging the puck over the glass and was dinged with a delay of game penalty with 5:15 left in the period.

The netminder made up for it by stopping three shots on Winnipeg's man advantage, including a blast from Laine.

Winnipeg finishes its four-game homestand Tuesday against Colorado. Dallas goes to Calgary for a Tuesday game versus the Flames.