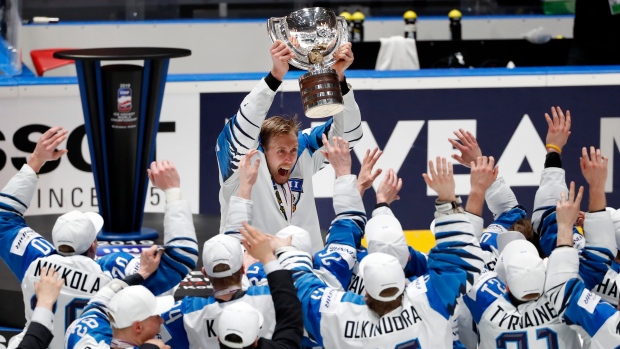 BRATISLAVA, Slovakia — The effort was better. The end result was the same. Canada settled for silver on Sunday at the world hockey championship after a 3-1 loss to Finland.

The outcome was the same as the two teams' first game of the preliminary round, back on May 10. Finland was the only team to beat Canada in the tournament.

"I'm very pleased with how we played," said Canadian coach Alain Vigneault. "We gave it our best shot. At the end of the day, we weren't able to capitalize on some of our plays and they were."

The gold is Finland's first at the tournament since 2011, a win that also came in Bratislava, Slovakia. Canada's silver pushes its medal tally to four in the last five years.

Theodore gave Canada a 1-0 lead with 9:58 left to play in the first. The 23-year-old defenceman from Langley, B.C., picked up a feed from forward Anthony Mantha near the Finnish blue line, then jetted down the slot before depositing the puck high over the glove of Kevin Lankinen.

"I kind of just jumped through and put it on net," he said.

"Our guys were definitely nervous prior to the game," said Vigneault. "They were focused on their task at hand. They went out and they played extremely well."

Anttila tied the game early in the second period on a power play. Theodore was called for tripping at the 2:15 mark and Anttila's sharp shot got through Murray's legs 20 seconds into the man advantage. It was Anttila's second goal in as many days. He also scored in Finland's 1-0 upset win over Russia in Saturday's semifinal.

Anttila came through again with his second of the game 2:35 into the third, igniting the pro-Finland crowd in sold-out Ondrej Nepela Arena with a shot that beat Murray high. Pesonen added an insurance goal with 4:06 left to play in the third, when Canada outshot Finland 21-3.

"I feel like, looking back at it now, we needed to get that second goal," said Vigneault. "In the third, when we had ample good looks, just couldn't find a way."

"That third goal really hurt, I think," said Jonathan Marchessault, who finished with a team-high seven shots on goal and had 10 points in the tournament. "It was a lucky bounce for them. They put on a lot of pressure. They cash in at the right time, they sit back and play well defensively, and the goalie was good."

Canada came from behind with late goals to win games against Slovakia and Switzerland earlier in the tournament, and kept the pressure on during the dying minutes. But Lankinen was there to stop them.

Finland iced an unheralded roster that featured only two players who spent any time in the NHL this season. Finland opened its tournament by handing the Canadians their only loss of the preliminary round and ultimately finished second in the Group A standings behind Canada.

The Finns then knocked off the two-time defending champions from Sweden in the quarterfinal before eliminating the undefeated, star-studded Russian team in the semis. Draft-eligible Kaapo Kakko led the scoring for Finland with six goals, while Lankinen came into Sunday's game with a 6-1 record, .933 save percentage and 1.57 goals-against average.

Canada is the only team to have reached the semifinal at the world championship for the last five straight years. The Canadians won gold in 2015 and 2016 and silver in 2017 before finishing fourth in 2018.

Sunday's final appearance marked an impressive return to the bench for Vigneault. The veteran NHL coach was dismissed by the New York Rangers at the end of the 2017-18 season. After a year away from the game, he'll take over the coaching duties for the Philadelphia Flyers in 2019-20.

"At the end of the day, we're very proud of how we competed as a team," said Vigneault. "We're obviously very disappointed but I'm very happy with how hard the players played."