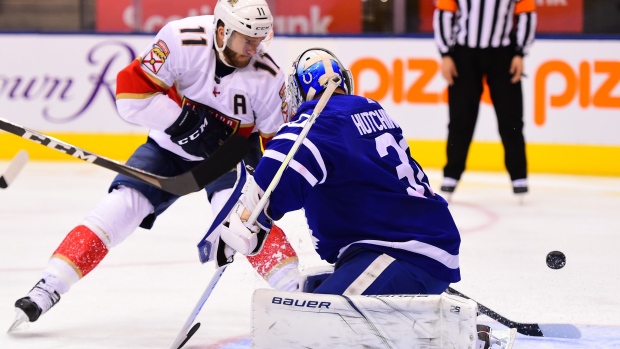 TSN Toronto reporter Mark Masters checks in daily with news and notes on the Maple Leafs, who practised at Ford Performance Centre on Tuesday ahead of Wednesday’s game against the Rangers in New York.

Michael Hutchinson will get the start for the Maple Leafs against the Rangers on Wednesday night. Kasimir Kaskisuo has been called up from the AHL and will dress as the backup, with Frederik Andersen officially listed as day-to-day with a neck injury.

A specific timeline for the all-star goalie’s return is murky. Andersen didn't travel with the team to New York.

"Hopefully nothing crazy," said winger Mitch Marner​ of Andersen's injury. "I saw him today so I think we're optimistic that he's back soon, but we'll see."

Andersen got hurt during the first period of Monday's 5-3 loss to the Florida Panthers, but it remains unclear what play the injury occurred on.

And while the players insist they have a belief in Hutchinson, there's no doubt there is a drop-off from Andersen and, as such, the group will need to sharpen its focus.

"It just makes us make sure we’re being tighter defensively," Marner said, "being smarter with the puck and just doing everything right."

After a rocky start to the season, Hutchinson has won four straight starts with a .948 save percentage in those games dating back to Dec. 21. But mixed in during that stretch have been three shaky relief appearances, including Monday when Hutchinson allowed three goals on 13 shots against the Panthers.

"It's behind us," Hutchinson said of the setback against Florida. "You know, it's such a close race right now that you can't dwell on the past. As a team, we played a really good game so you move on from it and get ready for the next game."

After Monday's game, Keefe refused to answer when asked whether he'd be confident in Hutchinson getting a string of starts should Andersen miss time. The coach said he didn't want to deal in hypotheticals. On Tuesday, though, Keefe gave the 29-year-old Barrie, Ont., native a strong backing.

"We've developed some real confidence in Hutch when he's gone in as a starting goaltender and he's done a great job," Keefe said. "In fact, some of the best starts we've had from our goaltenders have come with Hutch in the net here in the last little while so we just have to keep this moving along ... He's been outstanding as a starting goalie and he’ll get that opportunity now."

Hutchinson, who lost his first six starts of the season and was briefly sent to the minors near the end of the Mike Babcock era, expressed appreciation for how he's been supported by the organization through some down moments this year.

"When you're winning games and you're contributing to wins it's easy to feel more comfortable around the guys," Hutchinson said after stopping 24 of 25 shots on Saturday against the Ottawa Senators. "The start of the year was definitely a tough time and since Sheldon has come in even just the atmosphere around our team has changed."

Hutchinson downplayed his results in the recent relief appearances, referring to coming in cold as "probably the hardest thing in pro sports."

The Leafs are expected to take Thursday off before hosting the Anaheim Ducks on Friday night. Toronto wraps up the week with a game in Montreal on Saturday.

Cody Ceci seemed to have a rough night against the Panthers, but the defenceman wasn't beating himself up about the performance.

"I felt pretty good, actually, in the first and second and then a couple bad bounces in the third end up in the back of the net," Ceci said. "The one off my skate, I mean, if you're just skating around the net it happens sometimes and it's unfortunate it ended up being the winner. But, I thought as a team, as a whole, we ended up playing one of our better games defensively."

Keefe came to the defence of the 26-year-old, who started the season with Morgan Rielly, but has been paired with rookie Rasmus Sandin of late.

"Overall, he's been consistent for us night in and night out," the coach said. "I know there's a lot of attention on last night and there were a few plays there that he'd want to have back, but we just find he's a guy who's very consistent for us in terms of the way he competes in his own end for us, the way that he kills penalties. Some guys are going to have bad nights here and there, it's going to happen, but we think more often than not he's been consistent for us and as we’ve changed his role and his partners up we feel he’s found some real consistency."

Ceci is due to become an unrestricted free agent this summer and has had his name mentioned in trade chatter.

"Trying to put that in the back of my mind," he said. "Right now, we're just focused on securing a playoff spot."

Keefe liked the vibe at the team's practice facility in the wake of Monday's brutal loss.

The practice lasted about 25 minutes with music blaring most of the time. This week the Leafs are holding their first ever Mentors Trip and many of the players and staff had a special guest in the stands at the facility looking on. No one seemed particularly preoccupied with the two points that slipped through the team's grasp hours earlier.

"Hockey’s a very funny game," Keefe noted, "the bounces go one way or the other and you tend to overanalyze things and that’s what we’re trying not to do here. We got to teach the process here and not get wrapped up in the results."