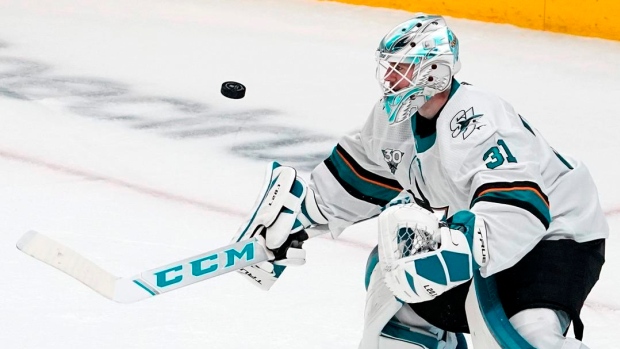 LOS ANGELES — Tomas Hertl had a goal and an assist, Martin Jones made 30 saves for his first shutout of the season and the San Jose Sharks defeated the Los Angeles Kings 3-0 on Friday night.

Timo Meier and Rudolfs Balcers also scored for the Sharks, who have won three straight and five of seven. Jones got his 25th career shutout and first since Feb. 29, 2020 against Pittsburgh.

“We put ourselves behind the eight ball a little bit, but the way we’ve been playing, we could go on a little bit of a run here and see where we’re at in a couple of weeks," Jones said.

Cal Petersen made 33 saves for the Kings, who have lost four of five.

Jones continued to dominate against the Kings, where he started his career in 2013. He is 4-1 against them this season and 17-5-3 since joining the Sharks in 2015, showing his comfort by making consecutive pad saves against Adrian Kempe midway through the first.

“You look around the league, there are goalies that have success against certain teams, and this is definitely one of them,” Sharks coach Bob Boughner said. “I think you always want to play well against your old team. And I think the other thing that plays into it is a lot of their best players are left over from Jones’ era and I’m sure he has a little bit of knowledge on their tendencies in how they play offensively and maybe he can read the play a little better.”

The Sharks scored the opening goal against the Kings for the third straight game, going up 1-0 at 2:57 of the first when Hertl redirected a shot by Nikolai Knyzhov from the blue line. It was Hertl’s fourth goal through five games of the season series, giving him eight in 29 career games between the California rivals.

Meier extended the Sharks’ lead to 2-0 with 11 minutes to play in the second, burying a one-timer from the left circle off Hertl’s pass below the goal line.

“I know he’s not had the best year statistically but this is the most important time of the year right now and this is when you see your best players step up,” Boughner said of Meier, who had gone nine games without a goal before getting his seventh of the season.

The Kings challenged for goaltender interference, citing Balcers pushing Drew Doughty into Petersen, but the contact was determined to have happened prior to the goal.

Balcers added an empty-netter with 26.5 remaining. He also had two assists for his first career three-point game.

The Kings were shut out for the second time this season. They have scored three goals in their past three games against the Sharks, all losses.

“Some of it is a hot goaltender," Kings coach Todd McLellan said. "Obviously he is playing really well against us. We created chances, we had good looks. A lot of that hot play by him goes onto our tape as well. We’ve got to bear down on some of those opportunities.”

San Jose has scored first in all four of their wins against Los Angeles, continuing the Kings’ troubling trend for falling behind. They have allowed the opening goal in 22 of 35 games this season, and a record of 3-13-6 in such games is a major reason why the Kings have work to do in their aim of returning to the playoffs.

The game finished with one referee after Pierre Lambert was helped to the dressing room midway through the second period. Lambert had been hit by an errant puck earlier in the period.

The Sharks and Kings will play again in Los Angeles on Saturday.