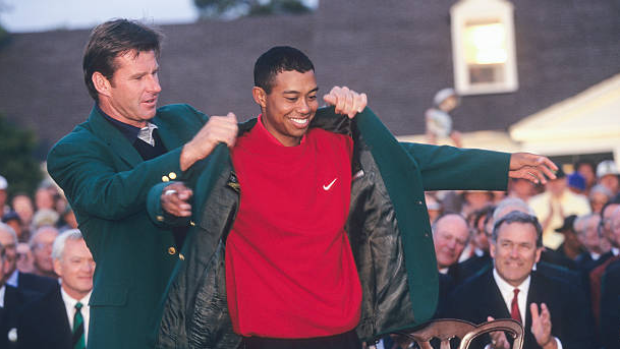 There are moments that happen in sports that are bigger than sports. It occurs when the story that unfolds goes beyond its normal borders, when it means more than just a game or a score.

Think of Jesse Owens at the 1936 Olympics in Berlin, the 1972 Canada-USSR Summit Series, or Jackie Robinson’s debut as a Brooklyn Dodger in 1947. For a variety of reasons, each of those took on a significance well beyond any final result.

The 1997 Masters was one of those, too. It was a spectacle as a golf tournament but it was also a statement about the game itself, made by a man barely old enough to understand the significance on a variety of levels.

At 21 years old, Tiger Woods had already proven himself to be a phenom before he arrived at Augusta National for his first Masters as a professional. He’d won three times in his short tenure as a member of the PGA Tour.

His start, however, wasn’t so grand. He played his first nine holes in four-over 40. A back-nine 30 left him in a respectable spot on the leaderboard, three shots back of the lead.

The next day, spurred on by playing the par-5 holes in five under, he posted a 66 and took the lead for the first time in a major championship. Heads started to turn and the number of patrons following him swelled. There was a sense that something special was taking place.

But not everyone was convinced. In the third round, Woods was paired with Colin Montgomerie, who wondered to reporters if a lack of experience might hamper the young star now that he was leading one of the most famous layouts in the world.

The Englishman soon understood that this was no ordinary golfer, and this was no normal tournament.

On the second hole, Montgomerie hit a solid drive that reached the top of the hill, before the hole descends steeply downhill towards the wide but not-very-deep green. His second shot with a 4-wood came to rest just short of the putting surface on the right side. After two mighty blows, he was in a perfect spot to chip to the back-left hole location.

“He was down – he must have been 150 yards ahead of me and hit a 9-iron to the back,” recounted Montgomerie years later.

As the day unfolded, Montgomerie witnessed an absolute dismantling of a course that had handcuffed so many of the greats over the years. For instance, Woods played his second shot to the par-5 15th with a pitching wedge. He hit his sand wedge into the 18th for a birdie to finish off a round of 65.

"There is no chance humanly possible that Tiger is just going to lose this tournament,” Montgomerie said after the round, no longer carrying any doubt of the capabilities of his playing partner.

Woods eased off the accelerator somewhat in the final round, ending with a 69. That gave him a 12-shot win, the largest in a major championship to that time (he would break his own record in 2000 with a 15-shot victory at the U.S. Open).

So devastating was his landmark win that it led to a new golf term: "Tiger-proofing." There was a need to lengthen and toughen not just Augusta National but every major championship course to prevent them from becoming mere pitch-and-putts.

That discussion and all those records and numbers were about golf.

But the win was much more than that. Here was a mixed-race man winning at a course that had a history of racism. It had prevented African-American members from joining until 1990 and kept them from playing in the Masters until 1975.

“As long as I’m alive,” said Clifford Roberts, one of the club’s founders in 1933 and a longtime Masters chairman, “all the golfers will be white and all the caddies will be black.”

The social significance, then, was as important as the sporting one, even if Woods never seemed comfortable with that side of his achievement.

There was a moment when Woods walked off the 18th green, after he hugged his father and walked towards the clubhouse. There lining the balcony and also the along the back lawn, were staff members, all African-American, applauding what Woods had just accomplished. This was as important a victory to them as it was to the man who hit all the shots.

Woods has had many incredible moments in his career, but it’s doubtful that when he eventually retires any will be more meaningful than the day he won his first Masters.