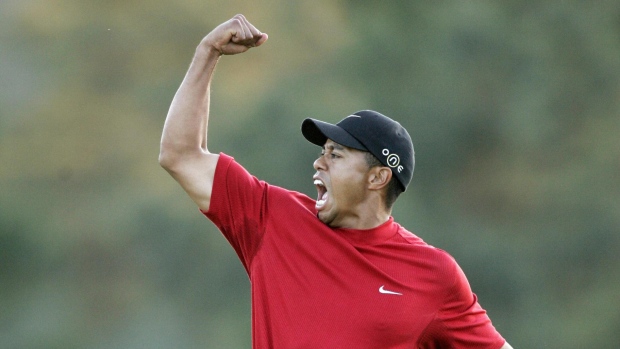 When I think back to the 2005 Masters, I have three very strong memories aside from who won.

The first is that it would be the final Masters appearance for Jack Nicklaus, the only man with six Green Jackets. It was a sad rather than a memorable moment however, as Nicklaus’s 17-month old grandson had died five weeks earlier in a hot tub accident.

Second, 1970 champion Billy Casper shot a round of 106 before withdrawing from the event. Even though the score wasn’t official as he didn’t hand in his scorecard, Casper stood and talked with the media for a long time after his round. He was honest about his round and wonderfully reflective of his years at Augusta National.

And third, it rained. A lot. The opening round began on Thursday after a five-hour delay and it was a case of catch-up for the rest of the week.

Chris DiMarco led after the first 18 holes, which were completed on Friday morning. There was more rain on Friday afternoon and that led to the second round flowing into Saturday.

DiMarco continued to lead through 36 holes, holding a four-shot lead over Thomas Bjorn with Tiger Woods six back.

While the course was still in relatively good shape despite the monsoons, some of the patron walkways were exceptionally muddy. Organizers put down pine straw to try and make them passable, but there were still lots of shoes clomped with mud. There were some slips and falls on the sloppiest of areas, indicated by muck on rear ends that hit the ground.

Remarkably, by Sunday morning the tournament was back on schedule as the third round wrapped up. In completing his third round, Woods birdied his first four holes (10-13) and, coupled with the three birdies he’d made the day before, equalled a tournament record with seven straight.

As the final round headed for the back nine it turned into a two-player battle, with Woods and DiMarco trading shots. Both players made birdies on the 15th hole and as they stood on the 16th tee, Woods led by one.

DiMarco’s tee shot on 16 found the middle of the green while Woods was over the back. It appeared to be advantage DiMarco, but what happened next was one of the most extraordinary chip shots in golf history.

As most fans know, there is a slope that runs down the middle of the 16th green feeding balls down towards the water. For those who have never seen it live, it’s hard to put into perspective just how severe the grade is.

That’s what makes Woods’ shot so amazing. It required the perfect amount of force along the exact line to get it to roll down the incline towards the cup. It is hard to put into words just how precise that shot needed to be.

Woods’ ball found that line and gently slid down the slope. Woods began to stalk it, moving to his left as the ball rolled right. But then it appeared the ball might stop a half-roll short. Woods bent his knees, lowered into a squat and watched the ball hold on the edge for a brief moment and then fall over.

The roar that lifted from that green at that moment is one of the loudest I’ve heard at Augusta National. For a guy who has a boatload of stunning shots, this may have been right at the top. In your life, indeed.

What isn’t as well remembered is that right after that electric moment, Woods bogeyed 17 and 18, dropping into a playoff with DiMarco.

However, he rebounded again in dramatic fashion by holing a 15-foot putt on the first extra hole to win his fourth Green Jacket and ninth major. As the ball dropped, Woods gave one of the strongest fist pumps he’s ever thrown, punching the sky well above his head.

There is one final memory I have of that long, soggy week. Arriving back at our rented home, exhausted after a long week, I took my mud-caked shoes and tossed them in the garbage can. That was one souvenir I wasn’t bringing home from Augusta.