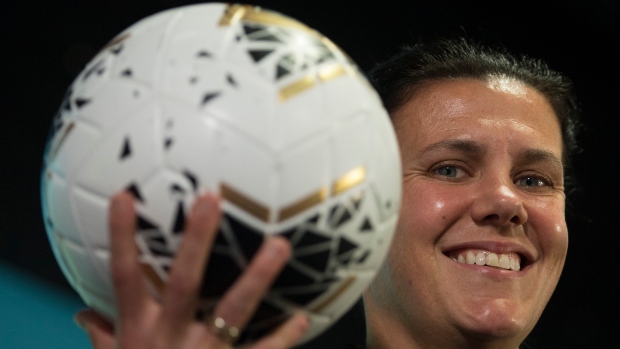 Christine Sinclair would like to clear the air. But not about anything concerning her illustrious career or potential retirement plans.

This is about the now infamous Mario Kart intrasquad tournament that took place during the Tokyo Olympics and some trash-talking by champion Vanessa Gilles.

“Let’s set the record straight,” Sinclair said. “I've never played Nintendo Switch before, okay? So, I was proud that I got out of my group. And then I lost in the next round. But for a beginner, I thought I did well. But Vanessa is just obnoxious with it.”

Now the team has moved on to Oculus, a virtual reality headset, which was brought into this month’s camp by Desiree Scott.

“I tried that for the first time yesterday, immediately took it off and went online and bought one. So, I will be ready for when that becomes a thing,” Sinclair laughed.

The Canadian captain and her teammates are back at home to take on Nigeria in a pair of friendlies. The two teams face off at B.C. Place in Vancouver on Friday before shifting to Starlight Stadium in Victoria on Monday.

For the team, the games are a continuation of the Celebration Tour that began in October in honour of the squad winning gold at the Tokyo Olympics. For Sinclair, who hails from Burnaby, B.C., it’s a chance to play in front of friends and family as the squad returns to Vancouver for the first time since 2017.

“I think when you're a younger player, you just take these opportunities for granted,” she told TSN during an interview on Thursday. “As you get older, you realize that the ability to play at home doesn't happen too often. So, for me, this is always special – to be able to play at B.C. Place in front of my friends and family, to represent Canada, to celebrate everything that we're about to celebrate. It’s going to be a big day.”

Part of that big day includes honouring Sinclair for breaking the international goal-scoring record. The Canadian captain now has 188 goals for her country, the most all-time among men and women.

She broke the record in January 2020 with her 185th goal, and Canada Soccer had planned to honour her at a friendly in Vancouver in April of that year. But the pandemic pushed everything back.

“Honestly, it happened so long ago,” Sinclair said. “So much has happened since I broke the record, that it was kind of like, ‘Oh, yeah, I forgot we haven't had the opportunity to do that.’”

Sinclair, in true Sinclair fashion, doesn’t want the focus to be on her, so she will be honoured during pre-game warmups, with her two nieces joining her on the pitch.

Friday will also serve as a send-off match for goalkeeper Stephanie Labbé, who announced her retirement earlier this year. Labbé has been the media focal point all week, something Sinclair, 38, wants to avoid when she retires.

“Honestly, I would like absolutely none of what Steph is experiencing,” she laughed. “I think it's amazing what she's getting, the spotlight, but that's just so not me. I seriously think I'm gonna be the person that just retires quietly, and you just never see me again.”

Jokes aside, Sinclair knows there’s zero chance of her being able to quietly ride off into the sunset.

“I understand that, but I can wish, right?”

Sinclair has said that she plans to play for the next two years for both Canada and the Portland Thorns, her club team in the National Women’s Soccer League. Qualifiers for the 2023 FIFA Women’s World Cup in Australia and New Zealand are quickly approaching this summer.

Despite a legendary career and an Olympic gold medal, Sinclair sees the World Cup as unfinished business. She is on the verge of playing in her sixth edition of the tournament, but Canada has only made it past the quarterfinals once, when a then-20-year-old Sinclair and the team came in fourth in 2003.

“I think for me and this team, it’s the only thing missing now,” she said. “We haven't really shown ourselves in World Cups. It’s a different beast… and we haven't really peaked in those tournaments. So that's something that excites me because it's a new challenge, a new thing to try to figure out.”

Head coach Bev Priestman told TSN earlier this week that she still feels like Canada is viewed as an underdog despite being Olympics champions. While Sinclair said she isn’t concerned how her team is regarded by others, she does see a perceived bias towards Canadians when it comes to awards and other recognitions.

Labbé came in second for FIFA Best Goalkeeper in 2021, and Priestman wasn’t one of the three finalists for coach of the year. No Canadians were named to the FIFA Best XI despite winning Olympic gold, while Americans like Carli Lloyd and Alex Morgan made the cut.

“I care for my teammates [for] awards and things that probably they've been passed over because they're Canadian. Somehow, Americans are winning awards when it's like, ‘What did they do this year?’ The women's side of the game, it's who's the most popular – let's be honest,” she said.

Off the field, Sinclair is embracing another challenge in the form of the “Add the M” campaign, which challenges men’s professional sports leagues like the NHL and MLS to add “M” in front of their names.

“It just raises the awareness that men's leagues are always the default,” she said. “It’s just trying to change that narrative…. The reception I've gotten has been so positive.”

Sinclair said the campaign has been producing merchandise with the rebranded names of men’s leagues and that her teammates are eager to sport the apparel.

“They think it's hilarious,” she said. “It just doesn't roll off your tongue, you know what I mean? MPGA Tour just doesn't sound the same.”

Sinclair herself is often on the wrong end of men’s sports being considering the default. There have been several instances on social media of outlets referring to Cristiano Ronaldo as the all-time international goal-scoring leader, while the Portuguese superstar is the leader for men’s soccer with 115 (73 behind Sinclair).

“It's something that female athletes have dealt with our entire careers, whether it's a record, whether it's the naming of leagues,” she said. “We’ve got a long way to go to enlighten society of the realities.”

Sinclair continues to be outspoken about many different topics, including the need for Canada to have its own domestic league. But she admits it’s getting harder to stay optimistic about the belief that it will happen.

“I'm not hopeful right now just because nothing has happened and nothing has changed,” she said. “And if not now, I don't know what we need to do as a as a national team to help create something.”

While Canada is still waiting for its own league or a team in the NWSL, Sinclair jokes that her club in Portland has become the unofficial Canadian team in the league. Former Canadian internationals Karina LeBlanc and Rhian Wilkinson joined the club at the start of the season as general manager and head coach, respectively, and Janine Beckie recently signed with the Thorns.

“We're just slowly migrating down there,” she laughed.

For Sinclair, the growing Canadian contingency also means a different relationship with her long-time former teammate and good friend, Wilkinson. The Thorns captain, who jokingly calls it scary that Wilkinson is now her boss, says her fellow Canadian has brought a great amount of organization to the club.

“She's definitely brought that level of detail from the national team to the Thorns,” Sinclair said. “Obviously, I'm excited for her. I'm excited for the organization. I think this is just a start for her. I think she's going to do tremendous things as a head coach. I couldn't ask for a better environment to be a part of.”