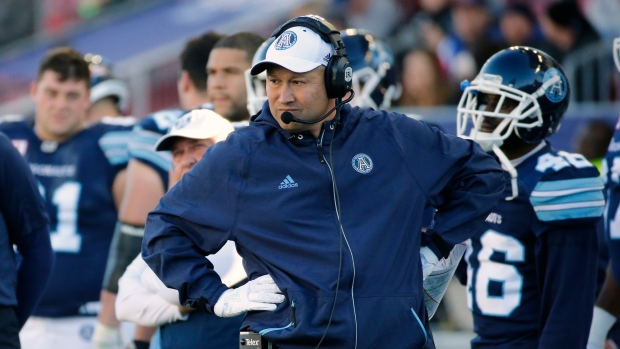 Milanovich is moving on from the Argonauts after five seasons at the helm. His resignation comes three days after the team fired general manager Jim Barker.

“We support Scott’s decision to pursue his goals in the NFL and wish him all the best in his new role,” Argonauts president and CEO Michael Copeland said. “We’ve made significant progress in our search for the Argos’ next General Manager. We hope to conclude the search process shortly. The first order of business for our next General Manager will be to hire the team’s next head coach.

"We are confident that we will be well prepared for a successful 2017 season. In the interim, all player personnel matters will continue to be executed as planned under the leadership of Assistant General Manager Spencer Zimmerman. On behalf of the entire Argonauts organization, and our fans, I would like to thank Scott for his many contributions and leadership over the past five years.”

The 44-year-old had been expected to remain as the Argonauts head coach, at least until a general manager was hired.

The Argos traded for and committed to Drew Willy as QB based on him being Scott Milanovich's choice.

“Scott Milanovich brings a variety of experience to our coaching staff, and we are eager for him to get started,” Jaguars executive vice president of football operations Tom Coughlin. “Working closely with Offensive Coordinator Nathaniel Hackett, we expect the quarterback position to deliver positive results under Scott’s direction and guidance.”

Milanovich led the Argos to victory in the 100th Grey Cup in his first season as head coach, and was named CFL Coach of the Year that season, but finishes with an overall record of 43-47 with the Double Blue.

“I would like to thank the Argonauts’ Ownership, President & CEO Michael Copeland, the staff, all the players and coaches, and most importantly, the wonderful city of Toronto and the loyal fans for the opportunity to serve as your head coach for the past five seasons,” Milanovich said in a Jaguars' release. “This has been an amazing experience for my family and me, and we’re so appreciative of all the wonderful friends we’ve made and memories we’ve created in Toronto.”

As a player, Milanovich spent four seasons as a quarterback with the Tampa Bay Buccaneers.

“We are pleased to welcome Scott and his family to the Jaguars organization,” Jaguars head coach Doug Marrone added. “He will be a great asset to our coaching staff, as his professional playing and coaching experience will be vital in the improvement of our quarterbacks.”

The Argonauts finished last in the CFL East Division last season with a 5-13 record.

The Argonauts could have trouble finding a new head coach within the CFL. As TSN's Gary Lawless points out, the window to interview candidates from other CFL teams closes on Jan. 31, and it's possible no team will grant the Argonauts permission. The Argonauts have not yet named a replacement for Barker.

window for @cfl #cfl teams to seek permission to speak with other clubs employees closes on Jan. 31. Not sure anyone would grant this late