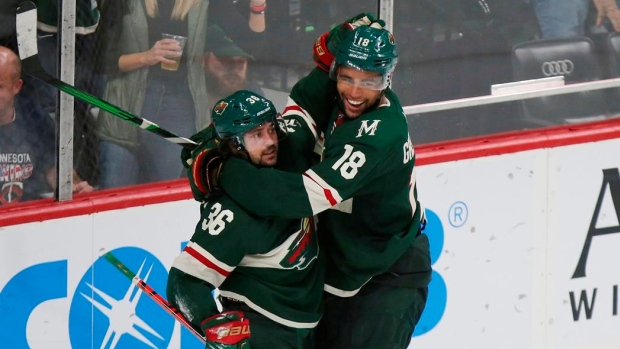 Mats Zuccarello scored the deciding goal and had two assists to lead the Minnesota Wild to a 4-3 win over the Colorado Avalanche on Saturday night in NHL preseason play in St. Paul, Minnesota.

Zuccarello, signed to five-year, $30 million free agent contract by the Wild on July 1, assisted on goals by Jason Zucker and Eric Staal in the second period. Matt Dumba also scored for Minnesota, and Devan Dubnyk had 30 saves.

The game was Wild captain Mikko Koivu's first since last February, when he suffered a torn ACL in his right knee. Koivu had two penalty minutes and blocked a shot in 16:41.

In Washington, Brian Pinho scored two goals, including the game-winner 8:31 into the third period to help the Washington Capitals top the Carolina Hurricanes 3-2.

Anton Forsberg and James Reimer each played half the game in goal for Carolina. Forsberg started and allowed two goals on 10 shots. Reimer was charged with the loss, despite stopping 9 of 10 shots.

In Philadelphia, Kevin Hayes scored against his former team, Jake Voracek had a goal and two assists and the Flyers beat the New York Rangers 4-1.

James van Reimsdyk and Carsen Twarynski also scored for Philadelphia. Carter Hart stopped all 11 shots he faced in the first two periods, and JF Berube had seven saves in the third.

It was the first time Hayes and Philadelphia coach Alain Vigneault faced the Rangers since their departures. Vigneault was fired following the final game of the 2017-18 season and Hayes was traded to Winnipeg on Feb. 25. Hayes' rights as an impending free agent were dealt to Philadelphia after the season and he subsequently signed a new deal.

Nikita Gusev and Will Butcher also scored for New Jersey, and Cory Schneider had 42 saves.

Leo Komarov, Mathew Barzal and Otto Koivula scored for the Islanders. Thomas Greiss started and gave up three goals on 11 shots through the first two periods, and Jared Coreau made nine saves in the third.

In Buffalo, New York, Victor Olofsson scored twice, including the game-winner with 2:36 left, as the Buffalo Sabres topped the Toronto Maple Leafs 5-3.

Michal Neuvirth started and stopped 20 of 22 shots in the first two periods, and Michael Hutchinson had seven saves on nine shots in the third.

OTTAWA - Keith Kinkaid stopped all 27 shots he faced as the Montreal Canadiens shut out the Ottawa Senators 4-0 on Saturday night.

The Canadiens improved to a perfect 4-0-0 in this year's pre-season with the win.

Craig Anderson stopped 27-of-29 shots through two periods of play and was the only reason the game was close as the Senators (2-1-0) were being heavily outplayed. Joey Daccord gave up two goals on five shots in the third period.

In San Jose, California, Max Pacioretty had a goal and two assists to lead the Vegas Golden Knights to a 3-1 win over the Sharks.

In Nashville, Tennessee, Rem Pitlick's unassisted goal 1:39 into overtime gave the Nashville Predators a 5-4 win over the Tampa Bay Lightning.

Pekka Rinne made 17 saves for Nashville.

Carter Verhaeghe scored twice for Tampa Bay, and Cameron Gaunce and Erik Cernak each had a goal. Scott Wedgewood stopped 39 shots for the Lightning.

In Chicago, Patrick Kane's goal 3:04 into overtime pushed the Blackhawks to a 3-2 win over the Boston Bruins.

Ryan Fitzgerald and Par Lindholm scored for the Bruins. Maxime Lagace stopped 24 of 26 shots in the first two periods, and Kyle Keyser made 20 saves the rest of the way.

In Glendale, Arizona, Nick Schmaltz and Conor Garland scored in the shootout to lift the Arizona Coyotes to a 4-3 win over the Anaheim Ducks.

Schmaltz and Garland were the only skaters to score in the tiebreaker.

Michael Bunting, Carl Soderberg and Clayton Keller scored in regulation for the Coyotes, and Darcy Kuemper made 30 saves.

John Gibson started and made 17 saves over his half of the game, Kevin Boyle allowed two goals on 12 shots.