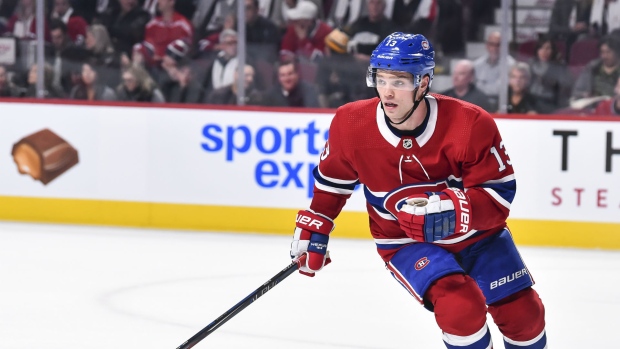 Montreal Canadiens general manager Marc Bergevin was on TSN 690 in Montreal Tuesday and addressed the performance of a couple of his team’s young players.

When asked about forward Max Domi’s play in his second season in Montreal, Bergevin said he felt the 25-year-old got away from his strengths.

“Max came in the first year and he played a north-south game. He played a power game with skill,” Bergevin told Tony Marinaro on The Montreal Forum Show. “This year I saw Max trying to pull up more, playing the skill game with power after. So, he switched what he does best because he’s a powerful player with skill, and I thought he was trying to play the skill game more than the power game. That’s what hurt him this year.”

After recording 28 goals and 72 points in an impressive first season in Montreal, Domi followed up with 17 goals and 44 points in 71 games for the Habs this season. The 2013 first-round pick spent most of the NHL’s Return to Play on the fourth line with Dale Weise and Jordan Weal, after skating with Jonathan Drouin for a good number of games during his first year in Montreal.

Bergevin was also asked about Drouin, whose third season in Montreal was limited to 27 games because of a wrist injury. The GM said he still thinks there is more Drouin can accomplish with the team.

“Our expectations for him were higher than what he’s done so far,” Bergevin said. “When I say so far, it’s the first three years in Montreal. He’s still a young player. I want to see more. I think we will see more. I think Drouin has the potential to be more and it’s going to be up to him to show that.”

The 25-year-old winger had seven goals and 15 points last season. He finished with 46 and 53 points respectively his first two seasons with the team.

“I think the biggest issue with Drouin is being consistent. But as a player matures you see more and more of that. I’m not giving up on Drouin at all. I think that the skill, the talent that he has that we all saw his draft year, it’s still there. He just has to bring it every night, and I have faith that Drouin will do that.”