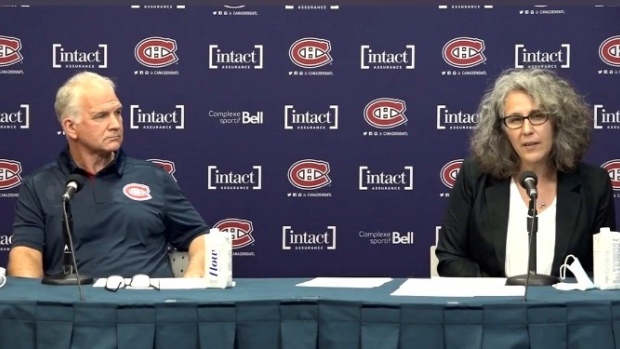 The Montreal Canadiens announced Wednesday that its Groupe CH organization is launching a Respect and Consent Action Plan, aimed at raising awareness with its employees and the public of the serious consequences of sexual cyberviolence.

“Our objective is to contribute to raise awareness and educate on the concept of respect and consent,” Canadiens vice-president of community engagement and foundation general manager Geneviève Paquette told reporters in a Zoom call on Wednesday.

The team announced that the plan focuses “on the internal environment of Groupe CH as well as the external and community environment” and will start with a $1 million seed investment fund. Initiatives are also underway to hire women in key positions within the hockey operations department.

"We want to ensure that our actions will be part of a concerted approach that will bring about positive changes within our company and in the hockey community," Canadiens owner, president, and CEO Geoff Molson said in a statement. "We are proud to have our partners in business and the community joining us in this important action plan."

The announcement comes nearly two months after the Canadiens chose London Knights defenceman Logan Mailloux in the first round of the NHL draft on July 23. Mailloux, who was on loan to SK Lejon in Sweden last season, was fined by Swedish authorities in December after admitting to two charges related to sharing, without her consent, a photo of a woman performing a sexual act.

The pick was widely criticized, with Prime Minister Justin Trudeau saying the team "showed a lack of judgement."

Paquette said that while Mailloux is learning and receiving therapy from the organization, there are no plans yet for the 18-year-old to reach out to others in the community.

“In Logan’s actions and his path to being educated, he will be doing some volunteer work,” she explained. “Following some conversations we had with outside council, it was not recommended that Logan speaks to other kids, youth or groups about what happened.

“He needs to have his own journey – his own credibility – to talk about this. We need to make sure that when he speaks up about what happened and why he did it, he needs to complete his journey as a person.”

In the week leading up to the draft, Mailloux posted a statement on Twitter asking teams not to select him. The Canadiens defied the request by picking him 31st overall, with general manager Marc Bergevin and assistant general manager Trevor Timmins defending the move shortly afterwards.

"We will work closely with him, give him the support that he needs. I know he's been remorseful about the incident, which we truly don't agree with it in all sense of the word,'' Bergevin told reporters after the draft. "But he's a young man who made a serious mistake of judgment.

“And we need to work with him, and we did talk to him and he's very aware of that and very remorseful. So that is a big step.''

The Canadiens announced earlier this summer that Mailloux would not participate in their rookie camp or main training camp this year.

Earlier this month, the Ontario Hockey League suspended Mailloux indefinitely for violating the league's expectation for appropriate conduct by a player. He can apply for reinstatement to the league on Jan. 1.

“We’re still early in this process…we’re going to take things one day at a time, one step at a time with Logan,” director of player development Rob Ramage told reporters on Wednesday. “But he’s motivated, and I believe he’s going to get there.

“There’s a path there before he steps on the ice with the Montreal Canadiens.”

Mailloux has previously said he "deeply regrets" taking a photo of himself and the young woman without consent during an "intimate moment'' and then sharing that photo with his teammates "to impress them.''

Paquette said the organization has reached out to the victim’s family but would not disclose the details of the conversations at the family’s request and to protect their privacy.