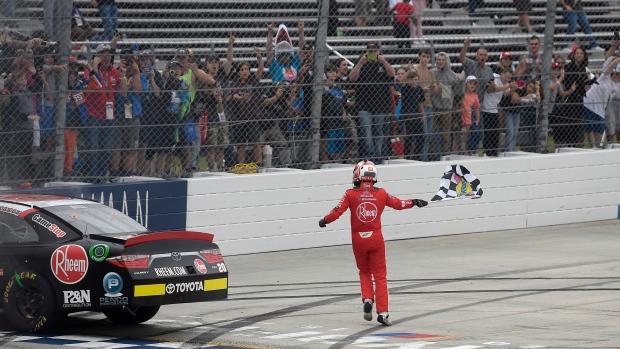 DOVER, Del. — NASCAR president Steve Phelps said the series is set to implement guidelines in the rulebook on sports betting in 2019.

Dover International Speedway opened its on-site betting kiosk this weekend and became the only track that allowed sports gambling on its property. NASCAR does not prohibit its drivers or team members from betting on the race.

"I think for '19, we'll have some rules that we'll put in place," Phelps said Sunday at Dover. "For right now, there'll be betting here. They have a kiosk here, you can bet inside. We'll study and see how that goes, but I think we'll have some rules in place for sponsorship, for what betting looks like, and continue to see what happens in the landscape overall."

Kyle Busch and Kevin Harvick, who started 1-2 in Sunday's NASCAR Cup race, have 3-1 odds to win.

Phelps, recently promoted to president, said some of the language in the 2019 rulebook could include rules prohibiting drivers and team members from betting on NASCAR.

"I imagine we'll get there," he said. "The way the rulebook looks today, I think the teams and the drivers understand what it looks like today, and I think we'll clarify for '19 with more specific language in it."

Fans and bettors lined up at the kiosk hours before the race started to wager on more than just the winner of Sunday's race. Prop bets were offered on everything from the number of drivers on the lead lap at the finish (12 1/2) to most laps led by any driver (188 1/2) to total cautions (7 1/2) over the 400-mile race.