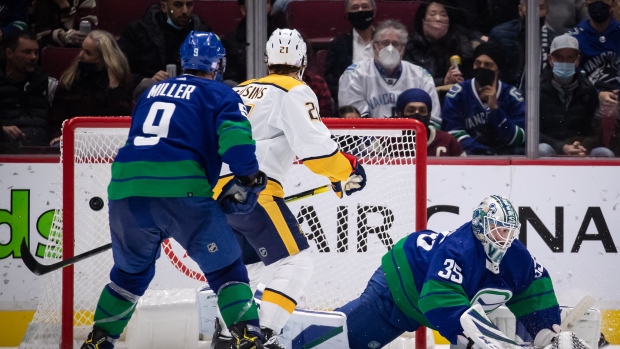 VANCOUVER — A pair of power-play goals pushed the Nashville Predators to a 3-2 win over the Canucks in Vancouver on Friday.

Roman Josi and Philip Tomasino both scored for the Preds (6-5-0) on the man advantage, and Matt Duchene added an even-strength tally. Mikael Granlund contributed a pair of assists.

Brock Boeser and Nils Hoglander replied for the Canucks, who fell to 4-6-1 on the season.

Vancouver got another strong performance from netminder Thatcher Demko, who stopped 25-of-28 shots.

Juuse Saros registered 26 saves for Nashville and collected his fifth win of the year.

The Canucks had a prime opportunity to change the narrative midway through the third after Alex Carrier was called for interference.

But the lone shot of the power play belonged to Nashville who saw a short-handed breakaway chance from Colton Sissons stopped by Demko.

The Preds took a 3-2 lead into the third period with their second power-play goal of the night 19:15 into the middle frame.

Mattias Ekholm sliced a pass across the crease to Tomasino, and the centreman sent a wrist shot flying bar down and in to give Nashville the lead.

Granlund set up the equalizer earlier in the period, springing Duchene for a solo opportunity deep in Vancouver territory.

Duchene faked a shot, then popped a backhander in over a sprawling Demko to make it 2-2.

The Canucks gained some momentum midway through the second with multiple chances for a go-ahead goal.

Hoglander finally gave the home side its only lead of the night 10:08 into the period with some patient play.

The Swedish winger received a pass from Bo Horvat in the slot and patiently out waited Saros before tucking a shot in behind the goalie's skate for his first goal of the season.

The first period ended with a flourish after Boeser drew the Canucks even with 8.6 seconds to play.

The right-winger drew Saros to the top of his crease, then seamlessly pulled the puck to his backhand before tapping a shot into the empty net for his third goal of the year.

The Predators opened the scoring with an early power-play marker after Hoglander was called for tripping Josi just over five minutes into the game.

Josi capitalized 24 seconds into the penalty, ripping a slap shot directly into the Vancouver net from near the blue line.

The Canucks' penalty kill has struggled mightily early this season and was tied with the Detroit Red Wings for the fourth-worst in the league (70 per cent) ahead of Friday's game.

Vancouver continues its homestand Sunday against the Dallas Stars. Nashville wraps up a four-game road trip in Chicago the same night.

This report by The Canadian Press was first published Nov. 5, 2021.