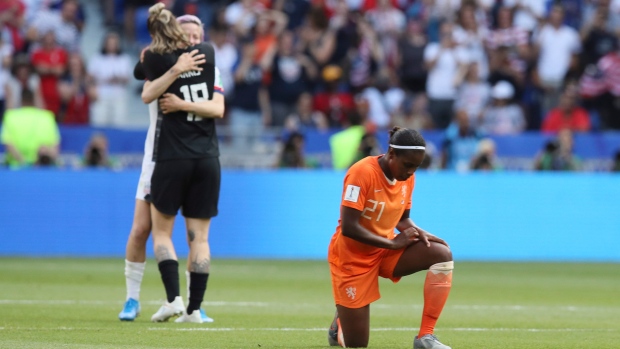 LYON, France — The long and agonizing wait goes on for the Netherlands, whose men's and women's teams are now 0-4 combined in World Cup finals.

On the 45th anniversary of the men's team losing its first World Cup final to West Germany, the women's team was beaten 2-0 by the United States in its first final on Sunday.

They are stuck on one European Championship title each — 1988 for the men and 2017 for the women.

"Of course we would have loved to win the final today, but we didn't," coach Sarina Wiegman said. "Our opponent was better, so we are second in the world. I'm very proud of the team and the staff."

The Dutch were outsiders against the U.S. and played like they were, choosing a highly physical approach in the first half to break up the U.S. attacks.

It seemed a clear strategy from Wiegman, who replaced Merel van Dongen on defence with the much taller and more imposing Anouk Dekker to perhaps intimidate the Americans early on.

After a couple of heavy challenges, midfielder Sherida Spitse was booked for chopping down midfielder Rose Lavelle.

Dekker made her presence felt, bumping forward Megan Rapinoe to the ground in one shoulder-to-shoulder challenge.

With 30 minutes played, U.S. defender Becky Sauerbrunn needed treatment after appearing to be winded, clutching her stomach as she stood up gingerly with the help of two medical staff.

Forward Alex Morgan protested another shoulder-to-shoulder challenge, this one from Dominique Bloodworth, who sent Morgan tumbling in the penalty area.

Defender Kelley O'Hara had to be replaced at halftime, after clashing heads with Dutch midfielder Lieke Martens while contesting a header.

Sauerbrunn needed treatment in the second half for a cut above her right eye, returning to the field with her head bandaged.

"It's a little sore. I might need a few stitches, but I will take this," she said after the game. "I wasn't sure I was bleeding and then I saw it just starting to pour on the grass."

It was a physical match, with the U.S. players mostly on the receiving end.

"I credit the Netherlands for making it hard for us," U.S. coach Jill Ellis said.

But that was only on defence and, occasionally, in midfield. The Dutch were rather toothless on the attack.

It was fitting Netherlands goalkeeper Sari van Veenendaal won the Golden Glove award for the tournament's best goalkeeper. She made one of the saves of the tournament in the semifinal against Sweden, and was outstanding against the U.S. in making five key saves.

Without her, the Dutch might not have even made the final and certainly would have been routed Sunday.

"She was sensational," Wiegman said through a translator. "I'm very proud of her performance and it's great she's been awarded this prize."

Wiegman appeared to concede the impetus to the U.S. by playing her centre forward, the prolific Vivianne Miedema, in a deeper role behind Lineth Beerensteyn as the makeshift striker.

While the tactic worked in the first half, with Miedema ably supporting her midfield, it ultimately backfired because she could not get into the penalty area enough.

"When we wanted to attack we lost the ball and we didn't play very well," Wiegman said. "It was very difficult for us to shoot."

Still, Wiegman has cause for optimism and is focusing on success at next year's Olympic Games in Tokyo.

"I think we can still improve and for the first time in history we also go to the Olympics. Hopefully, we can perform well again," she said. "There's a high potential in our team."